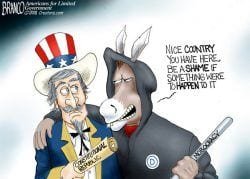 Since the 2016 elections, more people are watching Democrats and their media sycophants self-destruct. Their new mantra is, “What is black is white… but white is black!”

Confused? Please don’t be. It is a sure sign of humans transitioning from sane to insane. Then when others question their insanity, they are brutally offended. They don’t want our comments, right?

Meanwhile, we watch so-called ‘normal’ Democrats turning into insane people screaming, rolling on the floor, pulling their hair out, constantly drooling, and slobbering out lie after lie. It’s now the icon of today’s ‘woke’ Democrats!

Just to ensure we have a foundational comparison, let’s grasp the meaning of what one would normally believe would be a faithful American. Faithful is described as:

So, can you find even one characteristic of faithfulness that can be applied to any Democrat or their news-less media sycophants, today?

Shouldn’t we believe any Political Party purporting to represent what’s best for America be faithful? Hmm…

Considering all things American, could it be Americans are simply confusing the Mafia with Politics? We have been told for many years the mob runs labor unions so have they taken over the Democrat Party, as well?

Within the mafia, we know there are no human rights… you do it or else, right? However, in politics, shouldn’t people still have Constitutional rights and choices?

Unlike the tyrannical mob bosses who reject input from their underlings (servants), shouldn’t political leaders in America represent and respect the wishes of people they serve? Major contrast, right?

Well, can’t we say with certainty we know the mob is never going to be characterized as faithful or servants? Mob bosses are renown for always doing what’s best for them and their wallets – regardless.

The other thing we know about mob bosses is they allow no person to stand in their way to achieve power and money! Are you thinking what I am thinking?

Gosh, as we dig deeper into what is happening in the Democrat Party, doesn’t it appear the mob and Democrats now have an eerie resemblance?

Should we dismiss the fact that Nancy Pelosi comes from a family of union bosses? Should we dismiss she has become one of the wealthiest Congressman ever while spending her lifetime as a public servant?

With her upbringing among union bosses, would it be fair to question why she demands open borders to promote the mob’s rackets of sex slavery, illegal drugs, and child sex trafficking? Is this the missing link creating our confusion?

If so, shouldn’t we ask if Nancy Pelosi is the mob boss or speaker of the House of Representatives? After all, she has made it clear that regulations, due process, and the US Constitution is meaningless to her.

Most importantly, no sane person could ever accuse her of being faithful to America, right? She has proven she has no respect for the electoral process or election results! That’s clearly unfaithfulness!

By removing the speaker of the house title and inserting Mob Boss, doesn’t everything Nancy Pelosi does begin to make sense?

Can anyone refute that she doesn’t give a damn about what Americans think or want because it’s all about her power and money? Sort of like a… Mob Boss?

We have all believed the Trump/Russia hoax is the greatest crime ever but if Nancy Pelosi is a Mob Boss, she may top it!

Support Conservative Daily News with a small donation via Paypal or credit card that will go towards supporting the news and commentary you've come to appreciate.
Tags
Democrats liberals Politics Politics