According to Sanders, the attempted takedown of Trump is “embarrassing” and is only going to help get Trump reelected. “The idea that they thought there was going to be some type of major bombshell to come out of this is frankly embarrassing for the Democrats,” Sanders proclaimed. “I think that it’s one of the dumbest and most ridiculous political moves that we’ve seen in history, how they have forced impeachment over this issue.”

She continued, “The fact is, I think that this should be looked at in-kind contribution to the president’s reelection campaign because all this is doing helping fuel his campaign. They’re raising more money, they’re rallying his base and they’re unifying the Republican Party in a way that only they can by attacking this president the way they do time and time again. It is absurd that they continue to go down this road and haven’t learned anything new from it. I think the big loser in all this process has to be Joe Biden. He is coming out … looking terrible.”

Sanders went on to liken the “fake” Ukraine scandal as the “absurd Russia witch-hunt” to “fool American voters.”

THINK ABOUT THIS: Why didn’t the whistle blower investigate the crimes of what Biden was doing in Ukraine and report that to the DOJ. So now Trump asked the Ukraine to look into it and he’s the criminal?. Can’t get more double standard, bias and corrupt than that.

As a presidential conversation is classified “confidential” at birth why
were people talking about it where someone without a “need to know” could overhear them. Sounds like the security system in the White House is in serious need of an overhaul. The point is that the whistleblower should have heard nothing without a “need to know.”

I always said President Trump needs to have every inch of the White House scrubbed. There’s nothing Obama wouldn’t do to Try and frame Our President since Trump is destroying his corrupt legacy. Also there are soo many Deep State Thugs roaming around. President Trump Needs to go with his gut and not trust anyone on who he backs.

In a truly shocking development, the ‘whistleblower’ at the center of the Trump/Ukraine witch hunt has been unmasked and revealed to be a agent of the Central Intelligence Agency. As The Washington Examiner reports:

The officer was detailed at the White House but has since returned to the CIA. His complaint became public earlier on Thursday, and it revealed, if accurate, that the White House officials“had intervened to ‘lock down’ all records of the phone call, especially the word-for-word transcript of the call.”

The complaint did not contain firsthand accounts of the controversial phone call, only secondhand and thirdhand information.

“Any decision to report any perceived identifying information of the whistle-blower is deeply concerning and reckless, as it can place the individual in harm’s way,” said Andrew Bakaj, the whistleblower’s lead counsel told the Times. “The whistle-blower has a right to anonymity.”

Sekulow told “Fox & Friends” co-hosts Friday morning and Sean Hannity in the evening that the complaint reads as though a law firm wrote it, not an individual. He brings up reasons to back up this allegation, which include looking at “the phraseology” and “the footnotes.”

Former CIA officer and National Security Agency Chief of Staff Fred Fleitz wrote Thursday in a New York Post op-ed that the complaint “appears to be written by a law professor.” He added that “congressional members or staff” could have played a hand in helping as well.

“It appears to be written by a law professor and includes legal references and detailed footnotes,” Fleitz wrote Thursday. “It also has an unusual legalistic reference on how this complaint should be classified. From my experience, such an extremely polished whistleblowing complaint is unheard of. This document looks as if this leaker had outside help, possibly from congressional members or staff.”

The revelation is potentially a clear indication that the entire Ukraine impeachment attempt very well may be another attempted coup by the deep state to unseat the President. Their efforts are a clear threat to the sovereignty of the American people, who alone have the right to choose their political leaders. Let’s hope their attempt doesn’t succeed.

“It is imperative we find out which White House official talked to the whistleblower and why. Why didn’t they lodge the complaint?” he asked on Twitter.

Republicans have panned the report as benign and alleged Democrats were grasping at straws in trying to attack the president. Graham seemed to agree, calling the report a “pig in a poke” bought by Democrats.

Slamming the Democrats for playing partisan games with our Democracy, Trump also lamented that nothing is getting done in congress right now because the Democrats are solely focused on impeaching him.

Never have I ever heard such a bunch of false accusations against a Sitting President, but even started before he became President. They are using new fake information from a so-called Whistle Blower (but who is actually a CIA (Brennan) Spy put in the White House specifically to find something (anything) on Trump they could use to (Impeach) the President. They didn’t even wait until the Transcript was given out by the President (unredacted). When the smoke clears, it will be found that this is just another ploy by the Dems to get rid of President Donald Trump. I hope the American People do not have to go through another 2 + years of the same thing as before. The only thing changed is it went from (Russia) to Ukraine. The American People have to ACT and vote these people out of Office ASAP.

Meanwhile Hillary Clinton is back in the limelight again.  In an interview airing Sunday on CBS Sunday Morning, she said that things happened during her ill-fated 2016 campaign that won’t happen again. Is she hinting at another run?

“Look, there were many funny things that happened in my election that will not happen again,” she told interviewer Jane Pauley. “And I’m hoping that both the public and press understand the way Trump plays the game.”

Clinton went on to claim Donald Trump was an “illegitimate president.”

An illegitimate president? He won fair and square with the electoral college that was put in the constitution by our founding fathers as a safe guard from the wrong people taking over and everyone has a vote counted.

“I believe he understands that the many varying tactics they used – from voter suppression and voter purging to hacking to the false stories – he knows that there were just a bunch of different reasons why the election turned out like it did.”

Trump did not use voter suppression, purging or hacking to false stories. That was all her campaign’s doing.

As one might expect, Clinton supports the movement to impeach Trump.

“My view is that, given the latest revelation, which is such a blatant effort to use his presidential position to advance his personal and political interests, there should be an impeachment inquiry opened,” Clinton said. “And I think, sadly, there are a number of grounds. But this one is incredibly troubling.” She added, “The most outrageously false things were said about me in 2016, and unfortunately, enough people believed them. So, this is an effort to sow these falsehoods against Biden.”

What a self aggrandizing, delusional, inept, vapid, attention seeking lying woman. Had ANY other Federal employee attempted what she did at the State Department, they would be in jail. 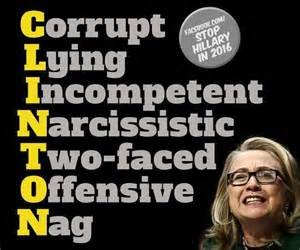 The reality is Clinton was a seriously flawed candidate who ran a terrible ground campaign and incorrectly believed that the polls predicting a landslide were accurate. Clinton needs to get it into her head that the only poll that counts is the one taken on election day!! She’s another one who still can’t get over that she lost and won’t accept it either. She is so out of touch with the majority of the people and the most corrupt politician in US history.