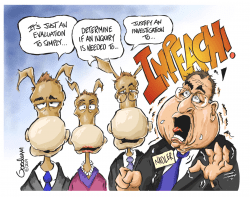 If Democrats would be honest, wouldn’t they now declare themselves to be the ‘Party of Destruction?’ How about the ‘Party of Hate Everything?’  Like any ‘good’ terrorist, isn’t destruction and hate their only mantra?

Ever notice when Democrats are questioned about their lies, they lose their minds and their heads explode?

Then to prove their terrorist tendencies, they burn and destroy their own neighborhoods! If not burning, then they assault their local businesses and destroy them, right?

Can you make this stuff up! Nope! Civility is not a characteristic or choice of the Democrat Party. Mess with them, and they will smash their noses against your fists and then bleed to death.

Yes, their outrages quickly die because all their tantrums are all about lies. After each tantrum, their lies are quickly exposed and debunked.

One of their Party’s major leaders presents himself as a Minister but is renown for his dishonesty, deceit, and lies.

Like most things Democrat, they promote one thing, but it always turns out to be something totally different. They routinely pull theories out of the solar system to convince people this will resolve all ‘earthly’ issues.

The one thing certain about Democrats is if they accuse anyone of anything, please know with certainty it is exactly what they are doing – not the accused. They are more than willing to climb a tree to tell a lie than to stand on the ground and tell the truth!

What’s amazing is the extent they will go to cover up their lies. Of course, if one should ever expect to receive an apology for their personal attacks, destruction, and pure lawlessness; please don’t wait on it.

Like any typical entitled royal elite, their words are decrees – not conversations. Debate or opposition to their statements are taboo and insulting since their words are final, right?

Just think about all of the ‘weather hoaxes’ perpetrated by Democrats over the past 50 years. Not even one of their prophesies have come true, but they never intend for truth to prevail by constantly changing the focus.

Democrats promote lies upon lies falsely believing everyone will eventually fall for them. It’s a well-known mental issue mostly diagnosed as schizophrenia.

Please consider one of their Presidential hopefuls, Elizabeth Warren, as a prime example of this medical condition. Hardly ever will she tell the truth and refuses to understand ‘the real world.’

Warren has masqueraded as an Indian for untold number of years gaining every possible drop of government compensation afforded to Indian and minority treaties. Her arrogance, narcissism, and schizophrenia mental illness conditions even convinced her into taking a DNA exam.

Her quest to prove her lie obviously backfired when truth revealed that her puppy had more Indian blood than she did. Oh, but don’t let your heart be troubled because she will continue lying and fooling as many innocent people as possible about something else just as egregious.

Then we have Obama and Biden dictating to a foreign government that unless they enrich their children with millions, they would withdraw US support. Even worse, they proceeded to dictate who that government would hire and fire. Shouldn’t this info been a part of the Mueller report?

Most know the difference between good and evil. There is only one reason people remove God from their lives and that is so evil can rule – without a conscious.

One need only to look around and inspect those countries denouncing God to see countries in various stages of depression, despair, and decadence. Is this what Americans want?

Democrats now leave America with only one choice in 2020… we must reelect Donald J. Trump to keep America great!

Next, we must stay in prayer for our country and never forget the only source where we obtain life, liberty, and the pursuit of happiness…

Galatians 5:1 Stand fast therefore in the liberty wherewith Christ hath made us free and be not entangled again with the yoke (tyranny) of bondage (slavery).