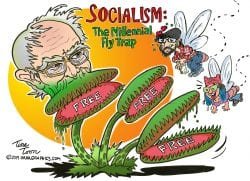 Socialists, Communists, terrorists, and tyrants live by no recognized set of ‘higher’ rules or laws. Instead, they live by ‘ever-changing’ man-made regulations designed by and for the self-aggrandizement of the elites at the top of their food chain.

In other words, their decrees from last week could become illegal next week in order to force people into labor camps and prison. All these forms of rulership have zero ethical standards. People/citizens have no value other than what they can produce for the leaders.

These types of rulers have and continue to murder millions of their citizens – due to disobedience, resistance, or just for pleasure.

Without question, all these rulers have a common hatred: they demand a Godless society focused upon the expulsion of Judeo-Christian values.

Next, they forbid any set of standards or regulations providing recognition of human rights, liberty, or personal freedom. In other words, people become property of the State. Slavery becomes their only way of life.

When we place all these aspects of terrorism into a box, doesn’t it sound just like the Democrats and their media sycophants, today? How long will it be before they come out of the closet and announce they are simply the Domestic Terrorist Party?

Please contrast the above information to the laws and standards revered by most Americans. First and foremost, America honors the principles of Judeo-Christian law/regulations. Laws like, “Do unto others as you would have them do unto you!”

Next, we complete the Godly foundation with the US Constitution and Bill of Rights. This is a rulership system that stands terrorists on their head. It places people in the driver’s seat and government as the servant – can you guess why elites and terrorists hate it?

Both systems have served America very well since its founding in 1776. It has produced the most successful nation in the history of the world. Today, America remains the envy of the world thanks to President Donald J. Trump.

Now comes the Democrat Party and their media arm to try to convince Americans we have missed the boat. They say we should have been another socialist/terrorist ruled country instead of a Republic. Humm…

Democrats now confirm that until such time that America is realigned to their socialist/terrorist system it would be best for Americans to return to the stone age. We must conform with their green new deal hoax.

Next, they double down on stupid to mandate we surrender all of America’s values, wealth, and achievements. According to Democrats, citizens must be forced to surrender our businesses, combustion engines, guns, cars, trucks, cattle, airplanes, boats, homes, wealth, benefits, and anything else that sustains American lifestyles.

In short, Democrats are not asking for our votes but demanding our votes – or else! One could conclude their mandates for our lives will be to become slaves, penniless, helpless, and return to the stone age lifestyles that they say we should have never left.

Obviously, Democrats are not prepared to offer attractive choices for our votes – just hate everything and everybody. For most Americans with an ounce of brains, this is not acceptable but great news to know they are supporting the reelection of President Trump!

America’s basic tenets for American Citizens are despised by Democrats. They trigger massive amount of insanity and emotional stress, so we must continue to expose them to these tenets that have made America such a great nation…

The preamble to the United States Constitution:

We the People of the United States, in Order to form a more perfect Union, establish Justice, insure domestic Tranquility, provide for the common defense, promote the general Welfare, and secure the Blessings of Liberty to ourselves and our Posterity, do ordain and establish this Constitution for the United States of America.

Ungodly people, Democrats, terrorists, socialists, and tyrants hate and can never love. Offering a ‘hand-up’ is an anathema to these types.

Godly people understand the importance of love (impersonal – wishing the best for all, and personal – love of family, spouse, children, etc.) and it must be our ultimate quest in life that confirms love always wins.

Romans 13:10-13 Love worketh no ill (no side effects) to his neighbor (others): therefore, love is the fulfilling of the law (God’s mandate for our lives). And that, knowing the time, that now it is high time to awake out of sleep (stop living in any other mindset than love for one another): for now is our salvation (removal from disasters) nearer than when we believed. The night is far spent (many have slept not paying attention), the day is at hand (we must now awaken): let us therefore cast off the works of darkness (terrorism, bullying, hate, lying, deceit, false witness, maligning, etc.), and let us put on the armour of light (open our eyes to fact and truth). Let us walk honestly (be full of truth and fact), as in the day; not in rioting and drunkenness (misleading others and acting like a mob), not in chambering and wantonness (self-serving gain), not in strife and envying (stealing another’s success).

Support Conservative Daily News with a small donation via Paypal or credit card that will go towards supporting the news and commentary you've come to appreciate.
Tags
Democrats liberals socialism