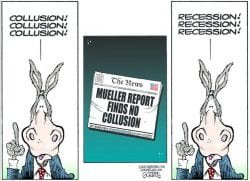 Does anyone know if we can sue the Democrat Party and their sycophant media for ‘whip-lash’ from lies told to Americans so frequently? Has anyone else noticed the Democrat talking points are being fired out as quick as an automatic weapon?

Watching Democrats and their media today is like sitting at center court observing a tennis match. Our heads are bobbing back and forth so much we need frequent chiropractic visits to repair the neck strain damages, right?

Only the ‘Wile E. Coyote and the Road Runner’ cartoons can accurately depict the Democrats and media never ending schemes and lies in their quest to destroy President Trump.

One would think after so many talking point losses, Democrats would try a different resource for their next talking point fix, right? No, they won’t, because it’s only lose, lose, and lose for Democrats since President Trump took office!

Meanwhile like the Roadrunner, President Trump gets stronger and stronger as he taunts the Democrats into making even more foolish decisions. One must question whether Donald Trump is really that smart or Democrats are that stupid!

Please inspect the Democrat Party attitudes about slavery from their leaders such as Senator KKK Robert Byrd and Senator John C. Calhoun along with other Democrat Party leaders and once again we easily see Wile Coyote explode!

Democrats and their sycophant media involved in ‘revisionist history’ deny reality in preference to lies suggesting the British were demanding an end to slavery in America.

However, bigoted White Americans fought for America’s independence based solely upon their lusts for slavery. This false narrative leads to their new lie (talking point) about slavery in 1619.

Yes, as Democrats push this false narrative, history confirms a different set of facts. We know the Democrat Party demanded slavery up until the 1960’s. Republicans finally won the battle in Congress against Democrats to pass legislation for Black voting rights.

We must also ask if any person would deny it was President Abraham Lincoln, a Republican, that signed the Emancipation Declaration? Such inconvenient truths destroy the attempts by Democrats to re-write American history.

Just like today’s Antifa arm of the Democrat Party, they used their KKK arm to threaten Republicans and Blacks to retain their political power and keep Blacks from liberty and freedom.

For Democrats, the 2020 election is only about restricting liberty and freedom from all Americans – not just Blacks.

That’s why the primary foundation of the Democrat Party is ‘racism.’ By using this word, they can end debates and successfully segregate people by race. When that happens, then one can conquer many.

Segregating people and turning them upon one another is a successful process right out of tyrannical maniac’s playbooks. Regardless, can anyone suggest Democrats and their media lackeys are renown for ‘truth telling?’ Hardly!

Proverbs 8:35 For whoever finds me finds life (mysteries and truth will become evident) and obtains the favor of the LORD;

Proverbs 9:11 For through wisdom (God’s Word) your days will be multiplied (blessed), and years will be added to your life.

Proverbs 23:19 Listen (study God’s Word from your Pastor-Teacher taught from original languages), my son, and be wise, and guide your heart (mind) on the right course (doing what is righteous).

Ezekiel 11:20 so that they may follow My statutes (God’s Word), keep My ordinances (mandates), and practice them (apply them to our lives). Then they will be My people, and I will be their God.

Proverbs 9:6 Forsake the foolish, and live (move forward to enjoy life); and go in the way of understanding (knowledge of God’s plan for our lives).