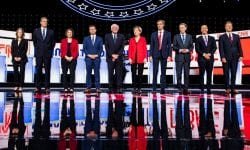 Wow! Today’s Democrat Party leaders just destroyed President Obama’s legacy. How could this happen? Why would they do this? What is their gain?

Perhaps the best way to explain this is to simply point out Democrat leaders are “deranged.” If anyone can’t distinguish ‘come here’ from ‘sickum,’ they just don’t need to be out in the public arena, right?

Yet, that’s the sum total of the Democrat Party leadership, today. These are very dangerous and mentally ill people tearing apart not only their own political party, but every sector of American society.

Yes, the Democrat Party is hemorrhaging badly from their self-inflicted wounds, today. Many suggest they are in dire condition and may not survive to run candidates in 2020.

The only good news for the Democrats might be they no longer have to promote or be concerned with their global warming hoax, because their political party may explode sooner.

Severing the heart of the Democrat Party certainly won’t help them to survive, right? Considering Obama was their only Messiah to ever rule America, it’s got to be the shot heard around the world.

Democrats put everything they have into promoting and elevating Obama Royalty – not because of his brilliance, citizen approvals, or decorum, but simply because he was almost a Black. Comparing Obama to Martin Luther King provides enough distinction to expose what a fraud Obama was.

MLK begged Americans and the world to consider the character of people, while Obama only wanted everyone to focus upon the color of their skin. MLK asked people to turn to God for their leadership while Obama wanted all to focus upon him.

Not being a Democrat, it’s pleasurable to watch their Party implode because they no longer represent Godly or American values. On the other hand, it’s stressful since we all recognize America was formed to have vigorous political debate and we need the Republican Party to be challenged.

Thus, political opposition is a good thing and should be welcomed. We must all pray that somehow the leadership of the Democrat Party along with their Presidential hopefuls will resign and adults will replace them.

Their current mindset in 2020 is to minimize and/or destroy American citizens in favor of promoting the care and wellbeing of non-citizens from around the world. Please don’t bother asking any of them a stupid question like, “How is that supposed to work out for America?”

We can only wonder where Democrats go from here! After all, if Obama is their new enemy, who are their friends? Alienating Blacks gives them an instant loss at the voting booths.

During a Bible study class, the following verses appear to be on point to disclose the new Democrat Party…

2 Timothy 3:1-7 This know also, that in the last days perilous times shall come. For men shall be lovers of their own selves (arrogant and self-serving), covetous (jealous), boasters (braggers), proud (better than others), blasphemers (deniers of fact and truth), disobedient to parents, unthankful, unholy (never putting God first in their lives), Without natural affection (attracted to evil and sinful ways), trucebreakers (unable to abide with their word or norms and standards), false accusers (blame others for their problems), incontinent (never happy), fierce (wrongfully attack others), despisers of those that are good (Godly people), Traitors (deny support of citizens), heady (having unGodly ideas), high minded (superior to all), lovers of pleasures (whatever feels good) more than lovers of God; Having a form of godliness (establish their own religion), but denying the power thereof (God’s will always wins): from such turn away. For of this sort are they which creep (always hiding their real agendas) into houses, and lead captive (get followers) silly women (people not having knowledge of Godliness) laden with sins (doing things they know is evil), led away with divers lusts (imagining they will gain power and money), Ever learning (studying evil ways), and never able to come to the knowledge of the truth (God’s Holy Word).