Transcripts of Justice Department official Bruce Ohr’s interviews with the FBI could open the bureau open to new scrutiny over claims government officials made in applications to spy on Carter Page.

During a Nov. 22, 2016 interview with the FBI, Ohr discussed meetings between dossier author Christopher Steele, Fusion GPS founder Glenn Simpson and Yahoo! News reporter Michael Isikoff, who two months earlier had published an article that alleged that Page was under FBI investigation for contacts in Russia.

The potential problem for the FBI is that the bureau said in four Foreign Intelligence Surveillance Act (FISA) warrant applications against Page that investigators did not believe that Steele was a source for Isikoff’s story.

The FBI relied heavily on Steele’s unverified dossier to argue to the FISA court that Page was working as an agent of Russia. The applications also cite Isikoff’s article and at least one other news report about Page.

“OHR met [redacted] in Washington, D.C. in late September, possibly close to the time when the Yahoo news article was published on September 23, 2016,” read the heavily redacted Ohr notes, which were released on Thursday.

“Simpson and [redacted] could have met with Yahoo or Michael Isikoff jointly, but OHR does not know if they did.”

In four FISA applications — which the FBI submitted in October 2016, January 2017, April 2017, and June 2017 — the FBI the bureau “does not believe that Source #1,” who has been identified as Steele, “directly provided this information to the identified news organization that published the September 23rd News Article.”

It is unclear if the redacted portion of the footnote adds further context to possible contacts between Steele, Simpson and Isikoff. 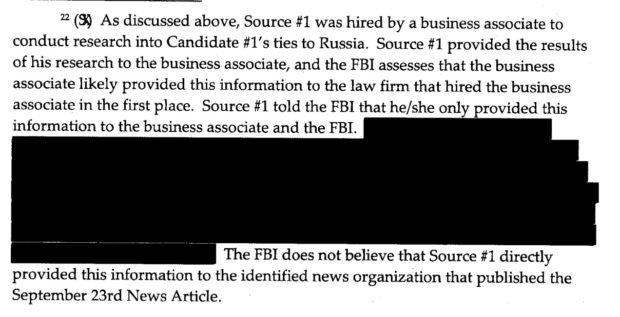 But the FBI’s overall assessment has proven false, as both Steele and Isikoff have acknowledged meeting in mid-September 2016.

Steele revealed in a British court filing on May 18, 2017, that he and Fusion GPS met with numerous reporters, including from Yahoo!, about Trump prior to the 2016 election.

Isikoff revealed last year that he met with Steele and Simpson in Washington, D.C. in mid-September 2016. Simpson tapped Steele to brief a handful of reporters about his investigation of Donald Trump in hopes of seeding stories in the press. Simpson’s firm was working at the time for the DNC and Clinton campaign.

Isikoff was one of the few to take the bait. He reported that investigators were looking into allegations that Page met in Moscow in early July 2016 with two Kremlin insiders, Igor Sechin and Igor Diveykin. The article led Page to take a leave of absence from the campaign. He sued Yahoo!’s parent company over the article, but the lawsuit was dismissed.

Mother Jones reporter David Corn would also publish a story based on Steele’s unverified allegations on Oct. 31, 2016. The FBI cut ties with Steele after that article appeared because of his unauthorized contacts with the press.

Republicans have accused the bureau of improperly using the Isikoff article to bolster the credibility of the dossier in the eyes of the FISA Court by presenting it as independent corroboration of Steele’s claims. They have also accused the FBI of misleading the court by claiming that the dossier was verified, when it actually wasn’t.

Democrats have pushed back against the idea that the FBI misled the FISA Court. They’ve also asserted that the FBI cited Isikoff’s piece in order to show that Carter Page was denying the allegations against him.

The FISA footnote also poses potential problems for Steele given his contacts with numerous reporters and former British and U.S. government officials regarding the dossier.

“Source #1 told the FBI that he/she only provided this information to the business associate and the FBI,” reads the footnote, which does not cite a date for when Steele allegedly made the claim.

Not only did Steele brief reporters about the dossier, he also provided a copy in late November 2016 to David Kramer, a longtime John McCain associate. Kramer has acknowledged that he shared the dossier with BuzzFeed, which published the document on Jan. 10, 2017. Kramer said in a court deposition that Steele encouraged him to speak to BuzzFeed’s Ken Bensinger, and CNN contributor Carl Bernstein.

Republican Sens. Chuck Grassley and Lindsey Graham on Jan. 5, 2018 referred Steele to the FBI for investigation into whether he lied about his media contacts. The Justice Department’s office of the inspector general interviewed Steele in June as part of an investigation into the FBI’s FISA applications.

Ohr would have had strong reason by the time of his November 2016 FBI interview that the information in the Isikoff story originated with Steele.

Ohr told the FBI that the former MI6 officer told him about the Page allegations during a meeting on July 30, 2016. Ohr was joined at the meeting by his wife, who worked at the time as a Fusion GPS contractor.

The Nov. 22, 2016 notes say that “OHR was told that Carter Page had met with high-level officials in Russia. Page met with Sechin and one other person.”

The special counsel’s report did not provide evidence to back up the dossier’s claims about Page, an energy consultant who joined the Trump campaign in March 2016. Steele also accused Page of being the Trump campaign’s liaison to the Kremlin as part of a “well-developed conspiracy of co-operation” to influence the 2016 election. The special counsel all but undercut that theory, saying that investigators failed to establish that a conspiracy occurred.

Ohr said that he knew during the campaign that Steele’s reporting was “going to the Clinton campaign, Jon Winer at the U.S. State Department and the FBI.”

“OHR was aware that Simpson was passing [Steele’s] information to many individuals or entities and at time [Steele] would attend meetings with Simpson,” the FBI transcripts also say.

Winer, who served as the State Department’s special envoy to Libya, was Steele’s main contact at Foggy Bottom. He was also a source for both Isikoff and Corn, who published articles touting Steele’s dossier.

Isikoff and Corn revealed in a book published last year that Winer vouched for Steele’s credibility as an intelligence source.

The Daily Caller News Foundation has reported that Simpson contacted Winer days before the Isikoff article appeared requesting to speak by phone.

Winer arranged for Steele to meet with Nuland’s deputy, Kathleen Kavalec, on Oct. 11, 2016. Steele provided details about his dossier sources, according to Kavalec’s notes.

It is still not clear whether Winer told others at the State Department that he was speaking with reporters.

The transcripts also contain another previously unreported connection between Simpson and Victoria Nuland, who served at the time as the State Department’s top official on Russia affairs.

“OHR knew Glen Simpson and others were talking to Victoria Nuland at the U.S. State Department,” says one transcript.

Nuland has acknowledged that she was involved in the State Department’s review of Steele’s work. She also approved a meeting on July 5, 2016 between Steele and his initial FBI handler, who worked as a legal attaché in Rome.

The FBI did not respond to a request for comment for this article.

Support Conservative Daily News with a small donation via Paypal or credit card that will go towards supporting the news and commentary you've come to appreciate.
Tags
Bruce Ohr Spygate

NATO Ally Forges Ahead With Russian Weapons Deal, US Does Nothing