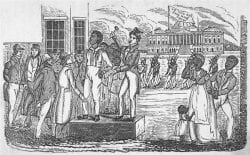 Our Founding Fathers anticipated building a country like none other and they succeeded beyond anyone’s wildest dreams. Of course, if we listen to ‘today’s’ Democrats, they would want us to believe our Founding Fathers came to America only to enslave Africans – a damning and blatant lie.

Christians in Europe were being harshly persecuted. The single most propelling force behind people leaving Europe to come to America was their desire to worship God, openly and freely.

This desire gave birth to our 1st and 2nd Amendments. These two Amendments are inseparable. European rule fixated on total control of citizens – enforcing their religion upon all, with no means of recourse.

European rule meant forcing citizens to do as they edict and worshipping as they edict. If public opposition raised its ugly head, they simply chopped it off. Without owning weapons, how does anyone go against government’s weapons of mass destruction?

Our Founding Fathers exposed great wisdom by also building a Constitution dedicated to reversing European government norms by giving power to citizens – not government. Ingenious? Of course, but still a very simple application of doing what’s best for the masses.

Along comes the ‘New Democrat Socialist’ Party demanding all this genius be reversed and even destroyed in favor of reestablishing European government principles of big government controlling citizens by edict.

The Democrat Socialist Party and its media sycophants have successfully convinced Democrats and ‘never Trumpers’ that Republicans – especially Donald Trump, are toxic and must be removed from office at any cost.

Why not capitalize on this moment and allow a Democrat with a brain enter the Presidential race focused upon primary support of the 1st and 2nd Amendments, then the US Constitution in general? In other words, offer a ‘positive’ agenda to draw people into the plan.

Imagine what differences could be made with a wise Democrat promoting Godliness, obedience to law, justice for all, and putting America’s greatness, first! Wow! Can we only imagine what this would do for Democrats?

Now we must awaken from such a daydream and accept the reality Democrats are the anti-American haters and big government lovers. Employing their Socialist agenda means citizens be damned, murdered, starved, or whatever it takes to eliminate public input.

Yes, they want to turn America into China, Russia, Cuba, or Venezuela. Their new America means they (Democrat elites) rule and edict laws for citizens to obey and oppress citizens. If we don’t obey, then it’s off to the gallows or work camps.

Sadly, Socialist Democrat’s priorities for America are to eliminate Christianity and Israel as they have done throughout many other geographical areas they have overtaken. It’s then easy to understand why they are so intensely fixated on eliminating the 1st and 2nd Amendments.

They know if they are successful at these two objectives, America will fall – their obvious primary goal. After all, has free speech ever harmed anyone? Has there ever been any inanimate object known to have intentionally harmed anyone?

It’s so very clear their arguments are unfounded. Regardless, they falsely believe they can huff and puff and blow our houses away using emotions. What they fail to understand is there are still more dedicated Americans than anti-Americans.

We can only pray that some day a Democrat with a brain will come upon the scene, but for now, we must defeat every Democrat running for any office knowing they are trying to destroy America. They are nothing more than a malignant tumor that must be removed from this earth.

Support Conservative Daily News with a small donation via Paypal or credit card that will go towards supporting the news and commentary you've come to appreciate.
Tags
2020 Election News big government Democrats Politics socialism the 2020 Election

What Is Section 230 and How Is It Different Than the First Amendment?

The Gun or the Shooter?