Posted by: David Vergun in In The News, Military and Defense, Syndicated Posts, US News July 19, 2019 Comments Off on Freedom of Navigation Vital to Security, Commerce 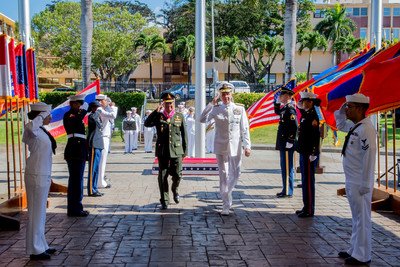 To guarantee a free and open Indo-Pacific region, the United States will continue to exercise its right to navigate above, below and on the sea in international waters, including in the East and South China seas, the commander of U.S. Indo-Pacific Command said at the Aspen Security Forum in Aspen, Colorado.

More than half the world’s population and wealth is in the Indo-Pacific region, which depends heavily on shipping for commerce and undersea cables for telecommunications, and these must be protected, Navy Adm. Philip S. Davidson noted in his remarks yesterday.

Davidson singled out those maritime areas because of provocative actions from China,  such as seizing, then militarizing, disputed islands in the South China Sea and using its military to shadow ships and planes from the United States and kits partners as they transit the area.

“What I consider to be the greatest long-term strategic threat to the United States and the rules-based international order is China,” the admiral said, adding that Russia also has a presence in the area and North Korea remains the most immediate threat.

Besides flexing its muscle in the East and South China seas, China’s growth in ships, planes, missiles, space and cyber capabilities has been dramatic, he said. For example, in 2000, China had about a dozen satellites. This year, China will launch more satellites — about 100 — than any other nation, including the United States.

“China is moving quite perniciously across the whole of the Indo-Pacific, if not the globe,” he said, citing China’s “Belt and Road” initiative, an aggressive infrastructure investment effort on several continents that he said circumvents world banking norms and practices.

The U.S. military is just one tool to use in addressing issues in the Indo-Pacific region, the Pacom commander said, but a whole-of-government approach that includes diplomacy and economic initiatives among allies and partners also is vital. Also important, he said is a need for emphasis on math and science in the United States to drive advancements in artificial intelligence, machine learning and autonomous systems.

Despite misbehavior by China, Davidson said, nobody is talking about confrontation or containment. Instead, he characterized the relationship as competitive.

“We do engage at the military level, so the risk for miscalculation is low,” he said. “There’s plenty of tactical ship and aircraft communication to avoid unplanned encounters at sea. Ninety-nine percent of encounters are safe, routine and professional, while the others make the news.”

Additionally, he said,the United States and China have an ongoing military-to-military dialogue, and U.S. and Chinese soldiers participate in humanitarian exercises.