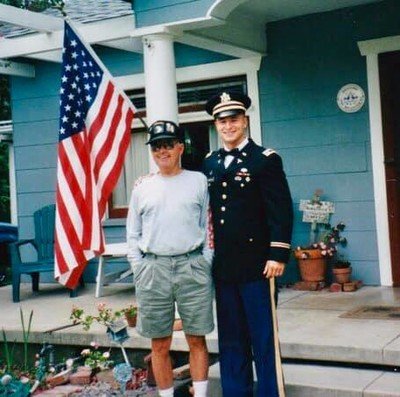 Army Col. (Dr.) Andrew Morgan wasn’t even born yet when Neil Armstrong walked on the moon.

However, Morgan, an astronaut, will be a part of the 50th anniversary celebration of the world’s first manned lunar landing.

July 20 at 12:25 p.m. EDT is the planned launch day for Morgan and two others, Aleksandr Skvortsov and Luca Parmitano, to blast off from the Baikonur Cosmodrome in Kazakhstan and rendezvous with the International Space Station, 250 miles above the Earth. This will be Morgan’s first spaceflight.

While all three Apollo 11 astronauts, Neil Armstrong, Buzz Aldrin and Michael Collins were all military jet pilots, Morgan’s background is quite different. When Morgan isn’t doing astronaut training, his job is serving as an Army emergency physician. The doctor served in elite special operations units worldwide, including in combat operations in Iraq, Afghanistan and Africa.

Morgan said his late great uncle, Harry “Clink” McClintock, inspired him to join the Army and learn to parachute, something he did at the U.S. Military Academy in West Point, New York, where he was a member of the West Point Parachute Team, the “Black Knights.” In 1996, his team earned the Collegiate National Title in competitive skydiving.

As for inspiration for becoming an astronaut, Morgan said: “When I was in the 4th grade I was going to elementary school in Austin, Texas. It was around the time of the Texas sesquicentennial, and we all had to write to famous Texans and I wrote to astronaut Alan Bean.

“I got a letter back from him and it was so exciting to hear back from him,” he continued. “Astronauts, it seemed like they were everyone’s heroes at the time, but to actually get something back that the postmark was NASA, that put astronauts on a pedestal for me forever.”

McClintock jumped into Normandy as a paratrooper with the 101st Airborne Division on D-Day, June 6, 1944, Morgan said. “Brave soldiers like him inspired me to serve. Thank you Uncle Clink, and thank you, the ‘Greatest Generation,’ for your service.”

Looking back at Apollo 11, Morgan said it was an American effort, noting that today, 50 years later, the ISS is an international effort. “It’s a beautiful contrast,” he said.