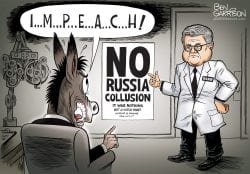 This is the way it has always been in America until Hillary Clinton lost her Presidential ordination. Afterwards, comes two groups to her aide… the Never Trumpers and Democrats. Their purpose and mandate from Hillary are to change normal protocol in America – regardless.

Their mantra is if Donald Trump is involved, he must be punished, smeared, and punished for winning the election. If it takes lies, treason, and criminal actions, it doesn’t matter. Their plan is to drive President Trump’s approval ratings down until he is forced out of office.

Using US Government resources and agencies with taxpayer funds, they produced the Russia Hoax. Spending millions and costing innocent bystanders many more millions, it failed.

Of course, they cannot accept failure so now it’s all about changing or defying normal laws and regulations. It means being forced to accept the Constitutional right of innocence until proven guilty – not acceptable for them.

Now, after over 50 Million Dollars of taxpayer money spent on all the investigations into Donald Trump, these insane groups are again putting the players on the field, turning on the lights, and yelling, “Play Ball!”

The rest of us feel sorry about their mental illnesses and law breaking, but isn’t it time to dish out some tuff love? Obviously, when adults act like children, perhaps we should punish them like children, right? So, why not turn the lights off and tell them to go home?

As with any addiction, the first step toward recovery is for the addict to admit the problem exists. Unfortunately, the anti-Trumpers continue to point their fingers at others and unwilling to admit their insanity addiction.

As an example, if you attend one of your favorite baseball games and the announcer explains there has been a change in the batting order and Barry Bonds, Hank Aaron, or Alex Rodriquez is substituting. Please ask yourself why would a coach do this?

Could the answer be as simple as understanding the Coach wants to win? Yes, any one of these renown players can easily hit the ball out of the park, right? Isn’t that what it takes to win?

Never in the history of America has there been such a vast group of losers like the anti-Trumpers. What’s sad is they know they are losers, but they can’t win following the rules. It’s now obvious they will do whatever it takes to win – even if it is illegal.

These losers are so insane, they are convinced that if they put President Trump on trial enough times, they will eventually get a favorable outcome. Yes, it means disobedience to the US Constitution, but with all the crimes committed so far, what difference does it make?

Now with the recent startup of more investigations/trials into all things Trump, the most insane members of their team like Little Georgie Stephanopoulos, liar George Will, and swamp oligarch Mitt Romney are entering the playing field. These insane losers falsely believe we the people will believe these so-called Democrat Party “heavy hitters” will successfully knock the ball out of the park!

The first problem the looney team has is realizing most Americans don’t any longer watch or read the insane mainstream media. Next, we just went through years of their Russia hoax and sick and tired of these hoaxes.

Finally, Americans are prepared for their next hoaxes and will be treated with contempt. The trickery to get President Trump to say he wouldn’t call the FBI if he heard a non-citizen say anything negatively about a Democrat is nothing more than another foul ball!

If the FBI, DOJ, and Mueller can’t indict Hillary Clinton with all of her illegal activities, what good would it do to call them? We now know with certainty she was guilty of colluding with Russia in the 2016 elections. In addition, weren’t these agencies accomplices to her crimes?

America, please wake up to the realities that our President will be falsely attacked and smeared every day in hopes people won’t vote for him in the coming 2020 elections. Please don’t be fooled. Just look at the amazing facts about what he is accomplishing virtually single handedly for “all” Americans!

President Trump needs and has earned Americans support. Employ tuff love by telling the never-Trumpers to get a life and grow up.

1 Corinthians 3:1-4 And I, brethren, could not speak unto you as unto spiritual (adults), but as unto carnal (children), even as unto babes (newborn) in Christ. I have fed you with milk (baby food), and not with meat (adult food): for hitherto ye were not able to bear it, neither yet now are ye able. For ye are yet carnal: for whereas there is among you envying, and strife, and divisions, are ye not carnal, and walk as men (immature)?

Support Conservative Daily News with a small donation via Paypal or credit card that will go towards supporting the news and commentary you've come to appreciate.
Tags
Democrats Politics Politics