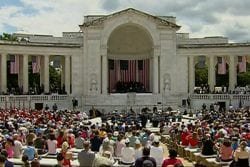 After observing several Memorial ceremonies, I was so excited to see both reverence for God and Country. Suddenly, it appears that God and Old Glory are reunited and smiling down upon America.

Instead, it’s all about what President Trump is doing for America and all Americans. He is no longer allowing Democrats and their media sycophants to tear down America or citizens, unchallenged. Their lies are finally being exposed and challenged at every turn!

Democrats and media accomplices may have a louder microphone, but President Trump is exposing their noise as nothing more than the baying of jackasses. America now knows with certainty; Democrats despise God, Flag, and the US Constitution.

At a recent gathering, one of the blithering Democrats yelling and talking down to everyone was asked, “What do the Democrats stand for, today?” Of course, she promptly became red faced, exploded, and tromped off without legitimate response.

Regardless of our politics, Conservatives always live by the Golden Rule and we never celebrate the embarrassment of others. No one enjoyed this display of ill manners, hate, and raw emotions.

This experience exposes so much of what the Democrats are all about. They are putting their brains in a lock-box and unable or don’t want to remember the combination. How long will it take for them to realize stupidity and lies are never a winning platform?

Democrats don’t understand life outside of their immediate circles is not robotic. Conservatives don’t do politics 24/7 and use their brains wisely applying fact and truth. When yelled at and told to believe 1+1 equals 3, please don’t be surprised at our reactions.

That’s exactly why I really feel that God and Flag are one again and smiling. First, the lying Democrats are finally being exposed. Sun light on sin is always good and it begins the healing process.

Yes, Spring is upon us, but for the first time in decades we are seeing Americans coming out of hibernation and back into life. More Americans than ever are starting to pop up and we need to continue nurturing them toward maturity.

Unlike Democrats, President Trump has proven he is colorblind and is lifting the burdens of government from all and offering opportunities to all. He is stopping Democrat plans to have their hands in our wallets, education, travel, personal lives, work environments, and constitutional rights. Along the way, he is exposing Democrat lies, fake news and hoaxes.

By doing these things and more, President Trump is allowing people of color to become unchained from the Democrat plantations while pushing Democrats off the cliff clamoring for even more ridiculous Socialist ideologies. Don’t be that surprised when the Democrat Presidential hopefuls move to their next plan to incorporate Taliban theologies.

Let’s shout from the rooftops that we are ‘mad as Hell’ and not going to take the Democrat’s BS anymore. Instead, we are going to proudly smile and stand with God, Flag, and President Trump!