What is the Combined Joint Task Force Horn of Africa? > U.S. DEPARTMENT OF DEFENSE > Story

Posted by: Katie Lange in Military and Defense, Syndicated Posts, US News April 19, 2019 Comments Off on What is the Combined Joint Task Force Horn of Africa? > U.S. DEPARTMENT OF DEFENSE > Story 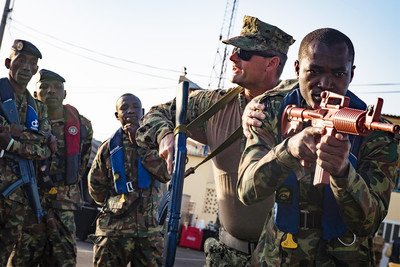 U.S. service members with the Combined Joint Task Force Horn of Africa have spent the past few weeks helping victims of Cyclone Idai, a devastating storm that slammed into Mozambique and Zimbabwe in March.

Most Americans don’t know a whole lot about the Combined Joint Task Force Horn of Africa — CJTF HOA, for short — or our relationship with the countries it involves, but the region in which it operates is vital to U.S. interests.

Not sure why? Here are some details that might help explain it.

CJTF HOA falls under the jurisdiction of U.S. Africa Command, one of the Defense Department’s 10 unified combatant commands. Africom’s core mission is to help African nations, the African Union and regional security organizations prevent and mitigate conflicts, neutralize threats and strengthen their own defense capabilities.

CJTF HOA is headquartered at Camp Lemonnier in Djibouti, which is the only enduring U.S. military presence in Africa.

Why is This Important to the U.S.?

Much of the Horn of Africa is still working toward stability. It’s also close to the Middle East. If we’re able to help those countries strengthen their own defenses, they’re better able to address their own security threats, and that can help reduce threats to U.S. interests.

So the CJTF HOA mission is pretty simple — it’s to prevent violent extremist organizations in East Africa from threatening America’s homeland, its citizens and its interests, as well as building the defense capabilities and capacity of its partner nations.

What Countries Make Up the Horn of Africa?

Essentially, the “Horn” is East Africa.

Who Does the Task Force Work With?

The task force works with partner nations, coalition forces and interagency and intergovernmental organizations to make the mission a unified effort.

What Do They Do?

The task force does a range of things, including security force assistance, execution of military engagements, providing force protection and providing military support to regional organizations that are working to counter violent extremist operations. Those efforts help ensure that there’s freedom of movement throughout the region and, of course, protection of U.S. interests. Our troops that are part of the task force also provide humanitarian aid, crisis response and contingency operations for all U.S. personnel in the region.

So what does that mean in layman’s terms? That CJTF HOA conducts training exercises and acts as an advisor to the region’s nations.

One example is Cutlass Express, an annual exercise that bolsters maritime security by training regional forces on techniques and tactics that counter piracy, illegal fishing and other threats. Another is Alligator Dagger, an opportunity for Marines and sailors to work with alliance forces on training that keeps them ready for missions on land, air and sea.

Combined Joint Task Force Horn of Africa is a large part of the Africom mission, so expect to hear more about it in the future!