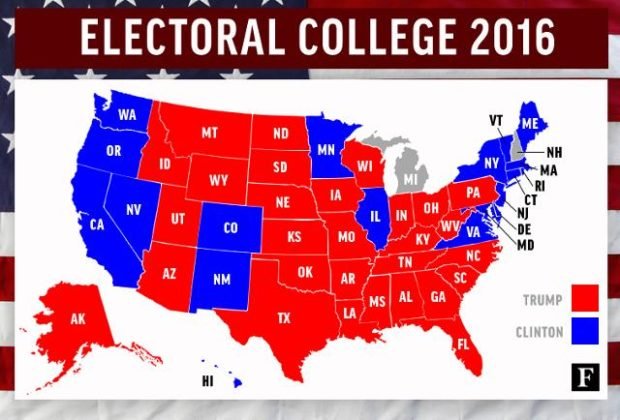 The proposed amendment to change the way presidents are elected won’t become law anytime soon, but Democrats are trying their best to keep the issue in the 2020 conversation.

Electors are nominated persons, known as electors, from the states and the District of Columbia, who meet every four years in their home state or district and cast ballots to choose the president and vice president of the United States.

In the popular election, the American people actually vote for electors, not for the candidates themselves. The candidate who receives the majority of votes from electors takes office. Although the Constitution allows the electors to vote for any candidate, they usually vote for the candidate of the political party that nominated them. In a limited number of instances, the structure of the Electoral College has led to unusual election results.

These Dems are still so outraged and triggered in not accepting the results of the election from two years ago and doubly upset that Trump was proven right in saying there was no collusion that they are now trying to look at ways to abolish the electoral college.

Leading Democratic senators are expected to introduce a constitutional amendment Tuesday to abolish the Electoral College, adding momentum to a long-shot idea that has been gaining steam among 2020 presidential candidates.

Sen. Brian Schatz of Hawaii plans to introduce the measure along with Sen. Dick Durbin of Illinois, the No. 2-ranking Democrat in the Senate, and Sen. Dianne Feinstein of California, the top Democrat on the Senate Judiciary Committee, according to Schatz’s spokesperson.

Also signed on to the legislation is Sen. Kirsten Gillibrand of New York, one of a growing number of presidential candidates who have called for electing presidents by popular vote, even though changing the Constitution is seen as virtually impossible today.

A constitutional amendment may be proposed by a two-thirds supermajority in both the House (about 290 votes) and Senate (67 votes) and requires ratification by 38 states.

Sens. Elizabeth Warren of Massachusetts, Kamala Harris of California, Bernie Sanders, an independent from Vermont, former Rep. Beto O’Rourke of Texas, Pete Buttigieg, the Democratic mayor of South Bend, Indiana, and former Housing and Urban Development Secretary Julián Castro are among the presidential candidates who have expressed openness to abolishing the Electoral College.

“We should abolish the Electoral College,” Castro said at a 2020 Democratic candidate forum in Washington on Monday. “It doesn’t reflect the will of the people of the country.”

Ahh but it does safeguard the will of the people and takes away the power of big states like New York., Calif., Massachusetts and Illinois that have major populations from deciding the outcome of elections.

Two of the last three presidents have lost the popular vote but won the Electoral College, leading critics to charge that the system is undemocratic and threatens the legitimacy of the American political system.

Those calls have been led primarily by Democrats, since they lost out in both 2000, when George W. Bush beat popular vote winner Al Gore, and 2016, when Donald Trump beat Hillary Clinton even though she had almost 3 million more votes.

The current system assigns electoral votes on a state-by-state basis according to the size of their congressional delegations, which gives an advantage to smaller states and a disadvantage to bigger states since all states have the same number of senators.

Since the ratification of the Twelfth Amendment, numerous attempts have been made to alter the electoral college and to change the method of presidential election, but none has succeeded. The popular-vote loss and narrow electoral-college victory of George W. Bush in 2000 again led many to question the appropriateness of the institution in a modern representative democracy. Others continued to voice strong support for the electoral college and its enhancement of the importance of less populous states (by basing the number of a states’ electors on its U.S. representatives and senators), fearing that otherwise presidential candidates would focus on more populous states and on the issues important to their voters.

Defenders of the Electoral College say it protects the interests of smaller and more rural states, and warn that presidential candidates would only campaign in major population centers such as New York City and Los Angeles if the popular vote alone mattered. This is true.

These Democrats are so evil and were so outraged about losing that they were making threats against certain electors to change their vote. This is how our system works and it has been fair and square ever since the founding fathers created it now sore loser democrats who are out of power want to change that.

Just for the sake of argument suppose in 2020 they did do away with the electoral college and Trump wins the popular vote. Are the Dems going to whine and cry again that it wasn’t fair and accuse Trump of rigging the election like Hillary tried to do and failed? Only time will tell.

Support Conservative Daily News with a small donation via Paypal or credit card that will go towards supporting the news and commentary you've come to appreciate.
Tags
the Electoral College