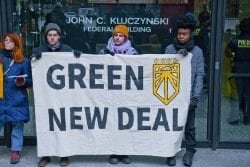 The “Trump-Train” is steadily chugging along adding more and more rail cars, packing in voters, and leaving the weak-kneed Republicans and “awakening” Democrats no choice but to come on board. Meanwhile, the Democrat train has no schedule and is yet to depart.

Void of any ideas, Democrats continue to promote whatever crazy plan is hatched on a day by day basis. It’s obvious their leaders are tossing out one dud after another, hoping one will stick. Unfortunately, it hasn’t happened and probably won’t happen with the current unhinged candidates, right?

Even at this late date, there is not one Democrat able to explain their plan – other than making the rich poor and giving everyone else money, free education, food, apartments, health insurance, and whatever. Mostly, they prefer to spew an endless stream of toxic lies like Socialism is better than Capitalism. Yes, they know Socialism has never worked but then truth-telling is not one of the Democrat’s virtues. It points out Democrats are just about money and power – not American citizens. Remember Obama’s famous, “If you like your doctor, you can keep your doctor” speeches?

So, if one has an ounce of brains and applies logic, removes all drama and emotions, it’s easy to believe there is no longer any hope for the Democrat Party. It’s imploding right before our eyes and is seemingly a death by a thousand cuts. Any reason to vote escapes them, but if you need a safe space to cry, yell, spew hatred, promote foolish ideas, hob-knob with Hollywood, and act like a jackass, then please know there is an opening in their “whine cellar” – and by the way, please bring your wallet, right?

Truth and fact are never a requirement for membership or promotions to their highest positions of power. Fact is, if one becomes truthful, they will soon be demoted and even drummed out of the Party. Just ask Professor Alan Dershowitz, Dick Morris, Doug Schoen, Mark Penn, and so many others tossed in the graveyard of “Democrat has been.”

The current momentum in the Democrat Party is going with Party Elders coupled with the wild west days to shooting from the hip. Collateral damage is not a concern, it’s take no prisoners. They are leaving burial grounds full of bodies for those who refuse to support their religion of hate and race-baiting. If one doubts this, please consider the lives and families of Justice Kavanaugh, Clarence Thomas, Robert Bork, General Flynn, Juanita Broaddrick, Kathleen Willey, Paula Jones, and the list is always growing.

They monitor every word said by media pundits like Rush Limbaugh, Sean Hannity, Michael Savage, Mark Levin, Laura Ingram, and others in hopes of finding just one little mistake in order to persecute them. It’s impossible for most to understand and accept their willingness to spend millions on this effort instead of developing opposition.

However, we now know they cannot stand opposition or to be challenged. That’s why they routinely yell at opposition with words like racist, homophobe, or any number of hate words, in an attempt to shut down debate. Their political dogma is so very similar to Muslim extremism where it’s their way or the highway. That’s why they are working so hard to eliminate the 1st and 2nd amendments to the US Constitution and the Electoral College. They want opposition shut down and not debated – they win, America loses. That’s their plan!