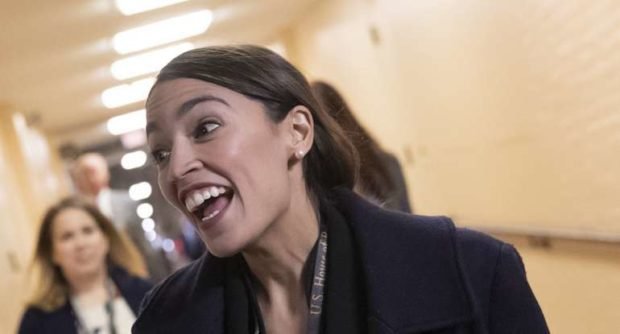 The immature and dangerous Alexandria Ocasio-Cortez has identified herself, after being in the House for a little over a month, as the “boss”. I’m not certain exactly what she thinks she’s the boss of, but the boss of shrillness and idiocy are all she‘s displayed. She evidently does not understand that her job as a legislator is to negotiate with Republicans and oversee the protection of our nation and our constitution, not give American citizens orders and then threaten to punish them when they don’t respond to her demands favorably.

If you were to tell Ms. AOC that, rather than having the government issue whatever idiotic healthcare plan that radical leftists could patch together, you would prefer to keep your existing healthcare, which you may be personally paying for or are getting from your employer, Bossy would tell you that you will not be allowed to keep your plan under her enlightened and necessary idea of liberty in America. At least our corrupt Democrat legislator is being honest with us up front, unlike the America-hating Barack Obama who lied and reassured us that under his unconstitutional Affordable Care Act we could keep our plan, period; and we could keep our doctor, period; yada, yada.

If you were to tell AOC that you would like to drive a large, powerful car, she would tell you that, under her plan, you will not be permitted to do so.

If you were to tell her that you like the idea of a dependable, 24-hour supply of electricity to heat and cool your home in all weather conditions, she would deny your request at such a ridiculous notion, because don’t you know, earth has only 12 years left to live.

Of course the ignorant Miss Bossy will have luxury healthcare, and she will ride around in Limos and private jets, and her home will be comfortable in all weather because she will be able to get Coal- or natural-gas-fired electricity all the time. But you won’t, under her new Socialist/Communist Green New Deal plan.

A vision of horror like that of Venezuela is on the American horizon with the current bunch of America-hating Democrats who think that they know how America should operate better than the unique American traditions developed and proven to be successful over decades of experience. Democrats are acting like a drunk mechanic who is ripping your car’s engine to pieces with sweet promises of a better running auto when he’s completed the modifications. and all you came in for was an oil and filter change.

Our new and unwelcome “Bosses” on the Democrat left are just dictators-in-training, and so far they’re not doing well with their indoctrinations. Their job is to represent us, not give us orders. But our main job as citizens is to boot these fools out of their elected positions before they do real, lasting harm to America.

Support Conservative Daily News with a small donation via Paypal or credit card that will go towards supporting the news and commentary you've come to appreciate.
Tags
Alexandria Ocasio-Cortez