As noted, some of these predictions have already expired, and there is so little introspection and record keeping by radical Democrats that they continue to make their asinine predictions with straight faces, and they take us for such complete dunces that they don‘t realize we can track these predictions and know that they are all a crock of crap.

A year ago, in 2018, Bernie Sanders started this 12-year-to-destruction prediction, and now, a year later, we are down to only 11 years left to live, and still dumb old Bernie and stupid young AOC and their radical pals are trying to frighten us with this same old 12-year due date to disaster date. When lying Democrats use the same interval of time and don’t allow for a passing of time and revise their count-down to disaster with each passing year, we know that the threat is completely fabricated and is nothing but BS.

One assumes that this count-down-to-global-death will find life on earth getting increasingly more miserable as we approach the 12-year due date of 2030, which Bernie established last year. We should mark our calendars and let’s see if our lives get increasingly more uncomfortable as we approach the left’s imaginary date-of-death for all mankind. I know that with the passing of time and the expiration of former disaster due dates by Paul Ehrlich, Al Gore, Ted Danson, Prince Charles and other renowned environmental liars, have not produced a more inhospitable environment, and by just looking around one can see that life has gone on rather nicely despite our being told that we would be burning to death by 2010.

Warning: the misery we are told we will experience as we approach 2030 cannot include the misery we feel as we see radical Democrats propose environmental legislation and issue constant daily warnings of environmental disaster. If the Democrat warnings are to be believed, we should be feeling more actual environmental discomfort as birds fall from the skies; volcanoes erupt without end; hurricanes blow without pause; record snow-fall causes the end of baseball season in Tampa; and record heat halts the football season in Green Bay.

And as an aside to this issue, maybe the bad weather we are told we will experience as we approach 2030 and the end of the world, will be caused by the God-less Democrats with their racism, their abortion-on-demand, their lying and the destruction being done to people’s lives in Sanctuary Cities. Maybe God is punishing all of us for allowing Democrat radicals to be the ones to guide our national policies down the dark, treacherous paths that Bernie and AOC are leading us. Just maybe. 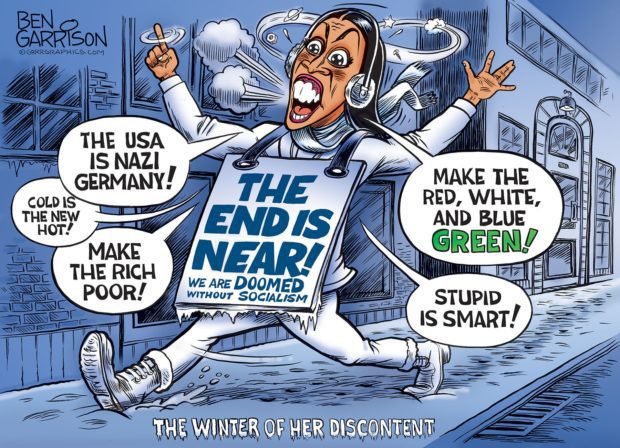