More than 12,000 people packed into a rally this past weekend at Chicago’s Navy Pier where independent socialist candidate Bernie Sanders spoke about his agenda as he vies for the Democratic Party’s presidential nomination. 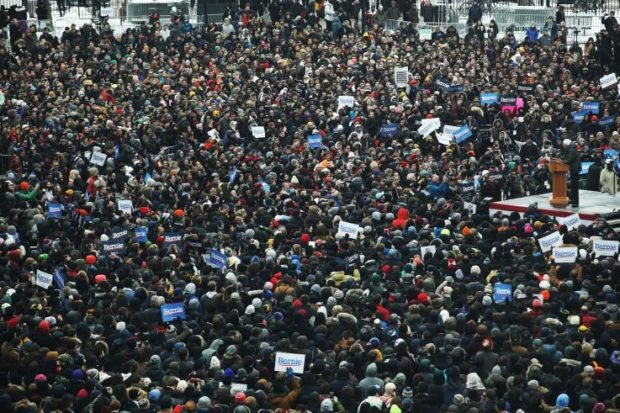 The rally featured his 2020 campaign slogan, “Not Me. Us!” which plays to the socialist-leaning, collective tendencies in the Democratic Party.

“Three years ago, they thought we were kind of crazy and extreme, not the case anymore,” he said. “We are not only going to defeat (President Donald) Trump, we are going to transform the United States of America.”

Bernie talked of “Real police department reform led at the federal level” and “bottom-up changes” to … everything.

“Whether it is the struggle is against racism, or sexism, or homophobia, or corporate greed, or environmental devastation, or war and militarism or religious bigotry,” Sanders said. “Real change never takes place from the top on down. It always takes place from the bottom on up.”

His two central themes seem at odds with each other. How can you have bottom-up changes that begin at the federal level? Central government control is the epitome of top-down.

From government control of healthcare to federally-mandated wages and attacks against Amazon and Google for making too much money, Sanders echoed communist leaders of the past in chastising wealth and the elite and Democrats are eating it up. Anita Cox, a social studies teacher said she agrees with Sanders’ progressive agenda — specifically Medicare for All, higher minimum wages and the Green New Deal.

“I want him to talk about that all of these things that he wants to do are possible,” she said. “I think he needs to get it across to the people who are wavering and thinking that none of these things are going to happen when they definitely could.”

Whether you agree with him or not, Bernie Sanders is emerging as a leading candidate in blue states like New York and Illinois. His populist socialism, with free things for everyone and promised punishment for capitalists, is eerily similar to Chairman Mao’s cultural revolution in China during the 1960’s and early 1970’s. Millions of lives were ruined, 35 million were persecuted, up to 3 million killed and a reported 100 million suffered during that populist uprising.

The media went berzerk fact-checking President Trump’s high-energy speech from CPAC on Saturday, but, Oddly, we were unable to find any mainstream media fact checks of Bernie’s speech. Go figure.

Support Conservative Daily News with a small donation via Paypal or credit card that will go towards supporting the news and commentary you've come to appreciate.
Tags
2020 Election News Bernie Sanders socialism