Virginia’s unborn are discovering what can happen when leftists take over state government. Although Democrat’s ‘compassion’ for illegals and murderers knows no bounds, the defenseless unborn take it on the chin.

This wouldn’t have happened if Trump had lost to Hillary. After the president threatened to drain their habitat, Swamp creatures in the Old Dominion united to elect leftists. If bears responded to the potential loss of habitat like Swampists did, park rangers would be forced to issue AR–15s to Yellowstone visitors. 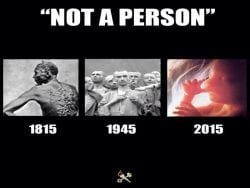 Seventy–one percent of Hillary’s voters turned out in Virginia’s 2017 off–year election. Republicans in the House of Delegates lost an unprecedented 14 seats and 11 were incumbents. All but one of the flipped seats were either in the suburbs of Washington, DC; the government installation–heavy Norfolk area, government–centric Richmond and isolated Communist cells in the university towns of Lynchburg, Roanoke and Blacksburg.

It was a winning combination of Big Government and Big Dependency. Swampists didn’t so much vote their pocketbooks as they voted to keep draining yours. But that’s not all Democrats are siphoning. Turns out leftists also want to drain amniotic fluid.

Del. Kathy Tran, one of Virginia’s newly emboldened Swamp legislators, is a fanatic regarding Democrats’ bedrock issues: Amnesty, Abortion and Alternate Lifestyles. She introduced an abortion bill that would allow the unborn to be executed right up until the moment of birth. And Tran isn’t about to go all Talmudic concerning reasons either. Abortion–up–until–birth would be legal to save the life of the mother or the lifestyle of the mother.

Tran would also dispense with bothersome second and third opinions on baby termination. Currently Virginia requires three doctors to certify the need for a third–trimester abortion. Tran cuts it down to one.

The doctor currently occupying the governor’s seat, Ralph Northam — another Swamp wave–rider — has an interpretation of Tran’s bill that virtually guarantees him a lucrative post–political career as the doctor to call when a woman chooses death.

Northam claims Tran’s bill would allow pesky babies, who somehow escape the abortionist and make it into the delivery room, to be killed AFTER birth.

From his perch atop Mt. Morality, Northam was taken aback by the reaction to the “if” in his statement. He asserted criticism of his view was “shameful and disgusting” and “really blown out of proportion.”

He has a point. Northam was merely suggesting everyone in the delivery room — with the exception of the infant — would form a mini–Death Panel to decide the child’s fate. It’s not like Northam was telling the abortionist to stab the baby with a pair of scissors. The governor is advocating a process — which makes the fatal outcome all nice and tidy.

When that failed to pacify dangerous advocates of letting the unborn live, Northam fell back on abortion mill clichés: “[men] shouldn’t be telling a woman what she should or shouldn’t be doing with her body.” What this talking–point spouting fool can’t seem to grasp is pro–life supporters don’t care what the woman does with her body — life advocates care about what she wants to do with baby’s body.

Back in the legislature, the storm caused by the bill produced much hunkering down. Tran erased her Facebook and Twitter accounts making her online presence as empty as her moral judgment. Richmond.com discovered the co–sponsor of the bill, Del. Dawn Adams, another Swamp winner, sent a contrite statement to her constituents saying she hadn’t read the bill before agreeing to sponsor it.

That begs the issue. The real question is what kind of person sees an abortion bill favoring the mindset of convenience and death and thinks “where do I sign up for that!”?

The Great Unifier once said elections have consequences and for the unborn the consequences can be fatal. Tran’s unborn execution bill was killed by the legislature for this session, but Republican control of the legislative branch is hanging by an umbilical cord.

Apologists for abortion mills contend Republicans are no different from the left. When the GOP wins its legislators do what Republicans want just like Democrats do what the left wants. Still I’m hopeful this November when the choice is between a party that can’t help cutting taxes and a party that can’t help cutting the cord of life, independent voters will opt to take the tax cut.