The signs do seem to be positive for those who wanted a genuine centrist and a reasonable Democrat with Senator Sinema as new analysis and looking back at the State of the Union footage appears to show Senator Jacky Rosen (D-NV) threatening Senator Kyrsten Sinema (D-AZ) saying “watch your ass.”

Whoa! Jacky Rosen angrily warns Kyrsten Sinema "Watch your ass" when she was the only Democrat applauding Trump.

She might as well have added "This is not a free speech zone." #SOTU #StateOfTheUnion pic.twitter.com/09COiZEsWL

The line that led to Senator Sinema giving a standing ovation to the President was “And to give critically ill patients access to lifesaving cures, we passed, very importantly, Right to Try.” Sinema was one of very few Democrats who applauded making easier for patients to seek potentially life-saving treatments, she doesn’t seem to view death as the first and most necessary solution to sicknesses. 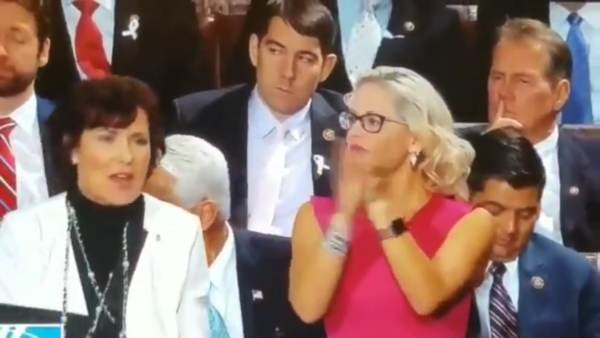 Senator Sinema was already angering the Democrats in Congress as she didn’t wear the white gowns which in the light of the Ralph Northam scandal was very very bad optics for a party unraveling in the state of Virginia. Rosen stood up muttered the threat to her but Sinema stayed defiant and continued to applaud the fact that the administration’s solution for people suffering serious illnesses isn’t just to let them die without trying.

The Conservative Daily News reached out to Senator Rosen’s office for comment about the threat but we have yet to hear back from them. We stand willing and able at any time to share with our readers any comments her office has explaining what happened.

Support Conservative Daily News with a small donation via Paypal or credit card that will go towards supporting the news and commentary you've come to appreciate.
Tags
Jacky Rosen Kyrsten Sinema Politics