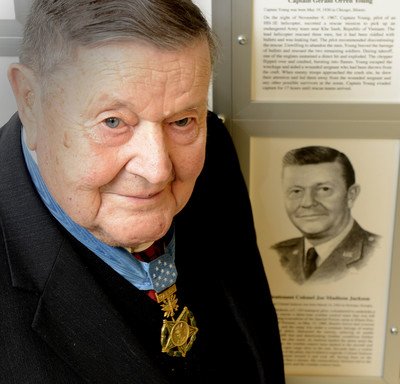 Air Force Col. Joe Jackson earned the nation’s highest honor by rescuing three men in Vietnam in 1968, and he became a living example of military valor for 50 years after that. Unfortunately, he passed away Jan. 12 at age 95. But his story — and the famous photograph that goes with it — will live on in military pilot lore for decades to come.

Jackson was born on March 14, 1923, and grew up in Newnan, Georgia. He enlisted in the Army Air Corps right out of high school in March 1941 because he said he’d always wanted to be an aircraft mechanic. He worked in that field until he happened to be on a flight where the plane caught fire. His knowledge of the plane’s mechanics helped land the aircraft, and that’s when he decided to become a pilot himself.

Jackson was commissioned as a pilot in April 1943. The rest of his World War II experience was spent training aircraft gunners, but by the end of the Korean War, he had flown more than 100 missions as a fighter pilot. As the 1950s progressed, he also became one of the first pilots of the U-2 spy planes.

Jackson continued his military career into the 1960s and deployed to Vietnam as a lieutenant colonel.

On May 12, 1968, he was the commander of a detachment of C-123 Provider cargo planes that was called in to help evacuate Kham Duc, a Special Forces forward outpost that had been overrun. Several airplanes had been shot down over the camp. The airstrip was littered with flames and debris, as well as gun positions established by the overrunning hostile forces.

Late in the day, as the weather was deteriorating, Jackson was circling the base in his C-123 when he learned that a three-man Air Force combat control team had inadvertently been left behind. Another C-123 ahead of his tried to rescue the men. That plane located where they were hiding but wasn’t able to pick them up.

Knowing their location, Jackson volunteered to go back in for them. He threw his plane into a deep dive, dropping 9,000 feet through intense hostile fire.

“I was the luckiest guy in the world. I was able to touch down in the first 100 feet and able to stop that airplane exactly opposite the three guys,” Jackson explained in a Library of Congress interview.

As the three-man team jumped aboard his C-123, Jackson said a rocket that had been fired directly toward them skidded to a stop right by the plane’s nose — and didn’t go off. He taxied around the dud rocket, flipped around on the runway and took off as the enemy continued to fire.

Once they landed safely at Da Nang Air Base, Jackson checked to see how badly the plane was damaged. It turned out that not a single bullet hit it.

“So, again, I was the luckiest guy in the world, I guess,” he said.

Jackson received the Medal of Honor on Jan. 16, 1969, from President Lyndon B. Johnson. He said he also received a copy of a photo taken on his mission — the only reconnaissance plane photo ever taken of a Medal of Honor action as it happened (you can see that above).

Jackson flew nearly 300 combat missions in Vietnam, returning to the U.S. to finish out his career as a colonel in 1974. He later worked for Boeing and settled down in Washington with his wife and two children.

On April 22, 1978, the Georgia Army National Guard Armory in Newnan, Georgia, was dedicated in honor of Jackson and another local Medal of Honor recipient, Marine Corps Maj. Stephen Pless, who received his medal the same day as Jackson.

We thank these men every day for their bravery.