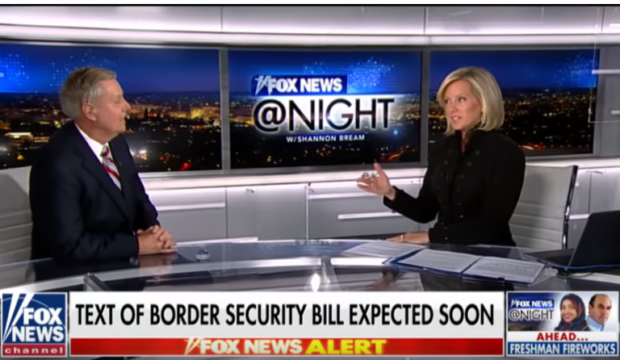 Senator Lindsey Graham (R-SC) said that the president should take the border deal that a bipartisan working group agreed to.

“Take this as a down payment,” Graham said Wednesday on Fox News @ Night. “Then go into the defense bill and move money around like Congress allowed you to do last year and build this damn wall.”

Graham says in the interview that there is $880 million appropriated already for border barriers in drug corridors, the new bill authorizes another $1.375 billion and Trump would have access to another $4 billion in Defense Department money that can be moved around at the discretion of the president and acting Defense Secretary Patrick Shannahan. The total of available funding comes to $6.255 billion dollars – more than originally requested.

Graham also said that the president should declare a national emergency.

“The president should declare a national emergency, because it is,” Graham stated. “Then let the Democrats talk about why they don’t want to secure the border.”

Despite the president’s willingness to take the deal, it may not happen thanks to last-minute gamesmanship by the Democrats who are demanding the addition of backpay for contractors and a re-up of the Violence Against Women Act.

“What we’re arguing about now, at this late hour, is whether or not we’re gonna’ pay backpay to contractors,” Graham told Fox’s Shannon Bream. “We’ve never done this before.”

“They [Democrats] are also were arguing about the Violence Against Women Act, which runs out this Friday,” he added.

Republicans are hoping to extend the Violence against women’s act until September and separate it from the border wall deal. The GOP also believes that the backpay for contractors should be negotiated as a separate item.

The addition of these two items just hours before the government is set to shut down again might make it impossible to pass the border funding legislation in time for the president to sign. It could also give members of Congress a very short window to review the legislation before the vote, a concern for which Rep. Andy Biggz (R-AZ) has a solution.

“Board member @RepAndyBiggsAZ introduced a one-week CR to give Congress time to keep negotiating on border security for the American people,” Rep. Mark Meadows said while releasing a statement Wednesday. “The conference report is projected to be thousands of pages long and was negotiated behind closed doors.”

“We believe that Members should be given enough time to read it before voting on it,” he added.

Congress has until midnight Friday to pass funding measures if they wish to avoid a shutdown.

Support Conservative Daily News with a small donation via Paypal or credit card that will go towards supporting the news and commentary you've come to appreciate.
Tags
Lindsey Graham The Border Wall