Coca-Cola and Delta felt the need to apologize Thursday after giving airline passengers Diet Coke-branded napkins that encouraged them to exchange phone numbers.

The front of the napkin read, “Because you are on a plane full of interesting people and hey … you never know,” according to CBS News. The flip side read, “Be a little old school. Write down your number and give it your plane crush. You never know …” with blanks for name and phone number. 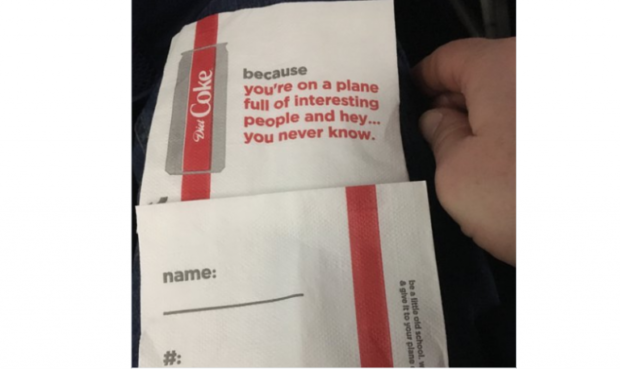 Both companies apologized after some people took to social media to complain about the napkins.

“We worked with our partners at Delta to begin removing the napkins last month and are replacing them with other designs,” Coca-Cola said after “sincerely” apologizing, according to CBS News.

“We rotate Coke products regularly on our aircraft as part of our brand partnership, but missed the mark with this one. We are sorry for that and began removing the napkins from our aircraft in January,” wrote Delta according to CBS News.

“If someone gave me a Diet Coke napkin with their name and number on an airplane I couldn’t get out of, I would ask to turn the plane around. That’s like a horror movie,” wrote a Twitter user named Andrew Jara on Thursday.

Others summed up their feelings more concisely.

“Fail,” NJ.com journalist Kevin Shea wrote on Twitter with a link to an article about the “airplane hookup napkin” apologies Thursday.

Other social media users found the napkins harmless or even cute.

“This Diet Coke Delta napkin is totally fine. not creepy at all, this is how people exchange phone numbers. [B]ut if you want to spend your life alone, that’s your choice, and that’s fine too,” user Edu de la Herran wrote Friday.

But some Twitter users found the controversy an opportunity to crack a joke.

“Delta and Coke should absolutely be ashamed of this napkin. Telling passengers that their planes are full of interesting people? Bald faced lie,” wrote Twitter user Justin Searls Thursday.

At least the passengers on Delta flights did not have to deal with an intoxicated pilot. A pilot flying for American Airlines was arrested before he made the long flight from Manchester, England, to Philadelphia after he was suspected of being drunk Thursday.

Support Conservative Daily News with a small donation via Paypal or credit card that will go towards supporting the news and commentary you've come to appreciate.
Evie FordhamFebruary 8, 2019
Facebook Twitter Reddit Telegram Share via Email Print