New research from the National Association of Realtors found that existing home sales have hit a three year low. 2018 was the worst year for sales of previously-owned homes since 2015. 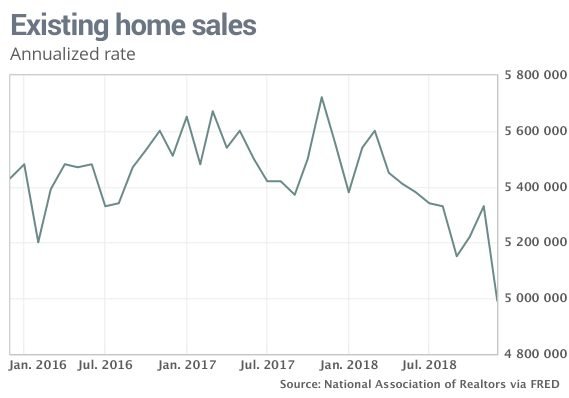 The month of December 2018 was especially bad for the housing market. Sales of previously-owned homes, which make up the vast majority of housing sales, were down 6.4% for the month and 10.3% lower than December 2017.

At the same time, stocks fell the most in almost three weeks amid concerns over President Trump’s trade battle with China and the ongoing government shutdown.

While government shutdowns don’t usually have an impact on the stock market, the length of the current closure is unprecedented. The Trump administration recently doubled its estimate of the shutdown’s impact on economic growth and airline stockshave already taken a hit. American, United, Delta and Southwest stocks have all dropped close to their year lows.

A strategist with Informa Financial Intelligence warns that once investors see the shutdown’s impact on the U.S. economy, “stocks will get hit.” Analysts expect that impact to come as soon as next week, when the Labor Department releases the latest jobs numbers.

Similarly, real estate experts warn about the shutdown’s impact on the housing market. In December, National Association of Realtors president John Smaby said, “The partial shutdown of the federal government has not had a significant effect on December closings, but the uncertainty of a shutdown has the potential to harm the market.” The U.S. government has now been partially shut down for 33 days.