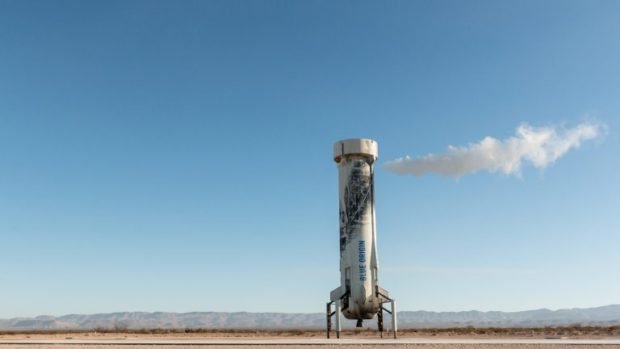 “NASA’s Flight Opportunities program strives to advance innovative space technologies of interest to the agency while also stimulating the growth and use of the U.S. commercial spaceflight industry as well as supporting capability development in the suborbital and orbital small satellite launch vehicle market,” NASA explains on its website.

New Shepard’s reusability is lowering launch costs and creating routine access to space. Lowering the cost of microgravity research increases the opportunities for universities, government researchers and entrepreneurs to test payloads and technologies in space.

“Named after Mercury astronaut Alan Shepard, the first American to go to space, New Shepard is our reusable suborbital rocket system designed to take astronauts and research payloads past the Kármán line – the internationally recognized boundary of space,” according to the Blue Origin New Shephard page. “Whether you are an astronaut flying with Blue Origin or sending a payload to space, your 11-minute flight on New Shepard will be the experience of a lifetime.”

The launch was the 10th successful mission for the New Shepard program and the 4th flight for this vehicle. It was another great practice run towards regular payload flights with a growing fleet of launch vehicles.

Flying New Shepard more frequently is critically important to the future of Blue Origin. It moves the company toward its ultimate goal to lower the cost of access to space and move heavy industry off Earth so they can use space to benefit Earth.

Additionally, the continued success and proven stability of this configuration on a subscale confirm that Blue Origin is using the methods, operations and technology needed for our larger scale programs.

In an upcoming mission, New Shepard will take payloads from around the world into space.

Support Conservative Daily News with a small donation via Paypal or credit card that will go towards supporting the news and commentary you've come to appreciate.
Tags
Blue Origin New Shephard