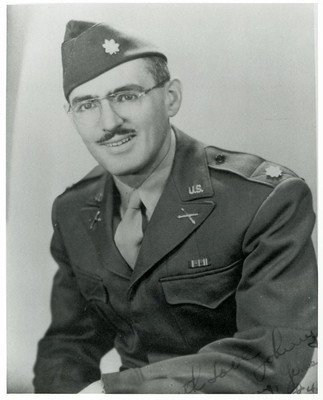 Choosing to go to battle when you could stay in the safe zone — that’s something a valiant leader would do, and that’s exactly what Army Lt. Col. John U.D. Page did while serving in Korea.

Page was born in 1904 in the U.S.-governed Philippines, but he grew up in St. Paul, Minnesota. His dream of attending West Point was thwarted by poor eyesight, so he went to Princeton instead, where he graduated in 1926 with an engineering degree and an ROTC commission.

Page served in World War II, where he commanded an artillery battalion in Germany. In 1950, he received orders to teach at the prestigious Command and General Staff College at Fort Leavenworth, Kansas, but he requested a combat role instead. So, off to Korea he went, serving with the 52nd Transportation Truck Battalion, X Corps Artillery, which commanded the 1st Marine Division at the time.

Page was in Korea for only two weeks, but his actions during the decisive Battle of Chosin Reservoir were so incredible that the Marines with whom he served recommended him for the Navy Cross — an honor that only two other Army recipients earned in Korea.

Here’s how the battle broke out: In late November 1950, Chinese forces infiltrated northeastern North Korea and surprised the X Corps at the reservoir. Massively outnumbered, the U.S. and United Nations troops in that area were surrounded and attacked over the span of 17 days.

On Nov. 29, 1950, Page left X Corps Artillery Headquarters at the port city of Hamhung in North Korea to set up traffic control on the main supply route north to the reservoir’s plateau, where the trapped troops were. He could have returned to the safety of Hamhung, but he decided to stay on the plateau to help the troops.

During 10 days of constant fighting on the plateau, Page did the following:

After those 10 days, the troops had succeeded in gathering at the edge of the plateau. Page flew back to Hamhung to get artillery support for them. Once again, he could have stayed where it was safe, but he went back to help his beleaguered comrades.

As the troops slowly moved south through a narrow pass on their way to safety, Page joined the guards in the rear. Enemy attacks were frequent, so he went out several times into the open and used machine guns to return fire until the danger diminished.

On the night of Dec. 10, the convoy had made it to the bottom of the pass but was stopped by the enemy, which surrounded them on three sides, spraying them with guns. Realizing how dangerous this was for the whole column, Page fought his way to the front and into the heart of the hostilities. He fought fiercely by himself until he was mortally wounded.

At the end of the Battle of Chosin Reservoir, United Nations forces were finally able to break through the surrounding Chinese troops and fight their way back to Hamhung. They were eventually evacuated, marking the complete withdrawal of U.N. troops from North Korea.

Page’s valiant and aggressive spirit went above and beyond the call of duty. His actions surprised the Chinese so much that they fell into disarray, causing several casualties and allowing his troops to fend them off. For that, he posthumously was awarded the Medal of Honor on April 25, 1957.

Camp Page, a former U.S. base in Korea, was named in his honor. It closed down in 2005, but a Navy Military Sealift Command ship, the MV LTC John U.D. Page, continues to carry his name and legacy.

Members of the 1st Marine Division who survived the battle, known as the “Chosin Few,” recently gathered in Norfolk, Virginia, to honor their fallen brothers.