George H.W. Bush, the 41st president of the United States, saw a presidency defined by the victory in Iraq and then a loss at the polls when a weak economy, and the now-infamous “Read my lips” promise, pushed voters towards Bill Clinton.

Bush was Reagan’s vice president and saw both the fall of the U.S.S.R. and the end of the cold war during that time.

George’s death follows the passing of his wife Barbara just seven months ago and his passing has led to an outpouring of support in political and media circles.

“Melania and I join with a grieving nation to mourn the loss of former President George H.W. Bush,” President Trump and First Lady Melania Trump wrote in a joint statement. “President Bush always found a way to set the bar higher.”

“Through his essential authenticity, disarming wit, and unwavering commitment to faith, family, and country, President Bush inspired generations of his fellow Americans to public service – to be, in his words, ‘a thousand points of light’,” they said in their statement.

Former President Barack Obama said that “America has lost a patriot and humble servant in George Herbert Walker Bush,” in a statement. “While our hearts are heavy today, they are also filled with gratitude.”

Vice President Pence and Second Lady Karen Pence said in a statement that “His example will always inspire and his lifetime of service will be enshrined in the hearts of the American people forever.”

The American flag at the U.S. Embassy in Argentina goes to half-staff in honor of the former president.

Our American flag in Argentina flies at half staff in honor of President Bush. I’m privileged to have known him as a friend, and I will always treasure the special bond we shared having led the world’s finest intelligence service. Our thoughts and prayers are with the Bush family pic.twitter.com/bzIeqmEJOM 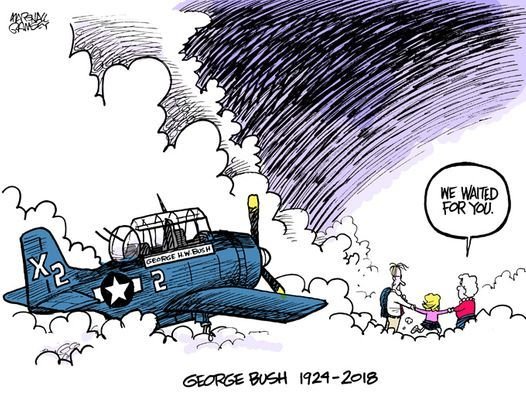 Bush will be honored with a state funeral, the White House announced on Saturday, and President Donald Trump and first lady Melania Trump will attend.

Content created by Conservative Daily News is available without charge to any eligible news publisher that can provide a large audience. For licensing opportunities of our original content, please contact [email protected]

Support Conservative Daily News with a small donation via Paypal or credit card that will go towards supporting the news and commentary you've come to appreciate.
Tags
George H.W. Bush