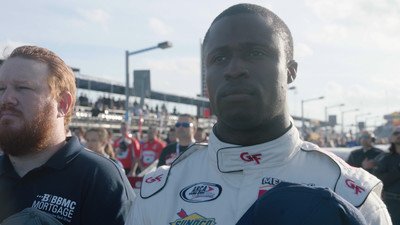 “It’s been pretty cool to be able to have that [designation] to myself,” the sailor-turned-race car driver said.

It all started when he was playing football at the U.S. Naval Academy. Yes — football. Which has nothing to do with cars. But during the offseason, he started taking an interest in the motorsport, so he took his V-6 Chrysler 300 on weekends to a drag strip at Capitol Raceway in Maryland.

During his very first race, he was surrounded by cars that were faster and louder than his. It was a feeling he’ll never forget.

“You’re nervous inside. … You’re hoping everything goes well, nothing breaks, and you don’t crash,” Iwuji said. “But once you hit the pedal and you just smash it and go, it’s almost like everything gets calm. You’re finally in the moment, you’re one with the car, and you’re just racing.”

And just like that, he was sold — he knew he wanted to be in motorsports someday. He started devoting the few hours he had free at the academy to racing. After graduating in 2010, he served as an active-duty surface warfare officer, but he kept racing on the side when he could.

“I bought a Dodge Challenger that I used to race at drag strips,” Iwuji said, adding that the strips were often hours from where he was stationed. “I started doing half-mile and one-mile drag race events.” Later, he said, he bought a Corvette to race on open track days.

He wanted to take it to the next level.

“In January 2014, I was in my room and I wrote on my whiteboard, ‘become professional race car driver,’” he said. “From then on, I was on this journey.”

Over the next three years, in between deployments and other duties, Iwuji raced more competitively, including in the NASCAR K&N Pro Series.

“Being on a track with other race car drivers is not like on the street,” Iwuji said.

Aside from going a lot faster, drivers also don’t have brake lights, so you have to judge when someone brakes.

“There’s no air conditioning or music. You can’t hang out and chill and relax,” he said. “You’re trying to control a car that’s very hard to control at high speeds.”

By early 2017, Iwuji knew he had to make a major decision.

“I wanted to still be connected to the Navy. It’s something that’s been a part of my life since 2005,” he said. “But I also wanted to race. So, the best way to mix the two and have the time to do it was for me to transition from active-duty to the [Navy] Reserve, and it’s probably the best decision I ever made.”

That’s because his career is flourishing. Earlier this year, Iwuji got promoted to the NASCAR Camping World Truck Series, which is the only series in all of NASCAR to race modified production pickup trucks.

His advice to other service members?