The anti-Trump bias from CNN seems to have no end. They continue to prove they are the enemy of the people with their anti-Trump bias which is why they are so low in the ratings and rightly so. With every chance possible, they attack the very values this country is based on. Now they just sank to a new low and attacked our military for a disgusting reason.

It is often tradition for the president to visit U.S. Troops overseas at Christmas time. Former Presidents Barack Obama and George W. Bush have done it and, following tradition, President Trump visited U.S. Troops in Iraq the day after Christmas.

Since Trump outwitted them by making them think he was alone in the white house and instead he and Melania went to visit the troops in Germany and Iraq they again spilled out their hate and rage.

Instead of covering that directly, the media was working overtime to spin it in a bad light. It first started with a Christmas article from NBC claiming that Trump was not visiting troops overseas.  NBC News released the article while Trump was in the air on his way to Iraq. They were forced to quickly correct it.

But it didn’t take much time for them to find another reason to attack. Quickly after he began meeting with U.S. Troops, the media began attacking not only the president but the military personnel meeting Trump.

CNN ran an article with the headline, “Troops bringing Trump hats to sign may violate military rule.”A few soldiers bringing “Make America Great Again” hats for Trump to sign is now being used to attack them. They claim that rules against partisan political campaigning make that move against the rules.

“IT IS, IN FACT, A CAMPAIGN SLOGAN, THAT IS A CAMPAIGN ITEM, AND IT’S COMPLETELY INAPPROPRIATE FOR THE TROOPS TO DO THIS,” KIRBY SAID. “NOT SUPPOSED TO DO THIS. AND I’M SURE THEIR BOSS IS SEEING THAT. THEY’RE NOT GOING TO BE HAPPY ABOUT IT.”

But, as it turns out, he is completely misinformed. U.S. Air Forces Europe make that clear in a statement, saying:

“THERE IS NO RULE AGAINST AIRMEN BRINGING PERSONAL ITEMS TO BE SIGNED BY THE PRESIDENT.”

“ANY TIME THE COMMANDER IN CHIEF OFFERS THE OPPORTUNITY TO MEET WITH AIRMEN, SUCH AS THIS OFFICIAL HOLIDAY VISIT BY THE PRESIDENT AND FIRST LADY, AIRMEN ARE WELCOME TO PARTICIPATE,” USAFE CONTINUED. “NO POLICY VIOLATIONS HAVE BEEN BROUGHT TO OUR ATTENTION AT THIS TIME.”

This statement makes it clear just how biased the left-wing media is.They so desperately want to attack President Trump that they are willing to go after the men and women in the military to do so and as it turns out, that attack is clearly done because it is Trump in the White House.

Pictures from Obama’s time in office show both the President and former First Lady signing pictures of themselves for uniformed U.S. Troops. There wasn’t any media uproar at the time.

But the media wasn’t so biased against the President at the time.

The media can’t help itself but to constantly attack the President. 90 percent of media coverage of President Trump is negative. So when Trump calls them fake news, he has a good reason. Not only fake news, but the enemy of the people.

Recently retired U.S. Army Ranger Sean Parnell weighed in on what it means to the U.S. military to have their commander-in-chief visit troops abroad, adding that with the way the media covers President Donald Trump, “he can’t win.”

“What I found truly remarkable about this is how the mainstream media roundly criticized the president for not visiting the troops at Christmas,” Parnell said Friday on “Fox and Friends.” “When they found out that [Trump] was there in Iraq, 24 hours later they criticized the manner in which he visited the troops!”

Parnell, having served in the military fighting against America’s foes including al-Qaida and the Taliban, said he knows how much it means to these brave men and women to have high-profile visitors on their bases, let alone the president.

“Clearly the troops love and adore him. Even if you don’t agree with all his political positions, he’s still the commander of the United States military and you show him deference and respect,” said Parnell, also a New York Times best-selling author. “He was surely and clearly met with enthusiasm.”

The former Army infantry captain feels Trump “should fight back against the media any chance he gets, because he did a great job out there visiting the troops. I was very proud to be an American watching him out there.” 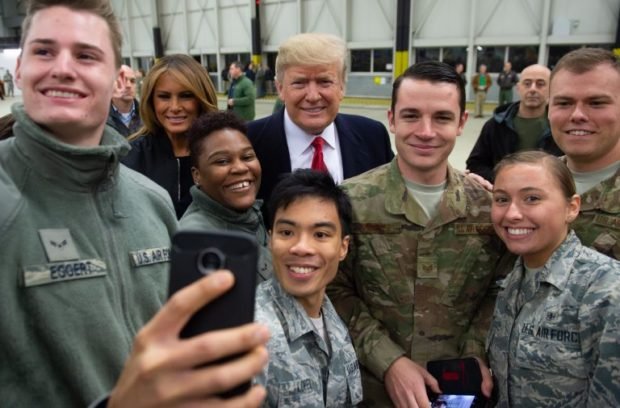