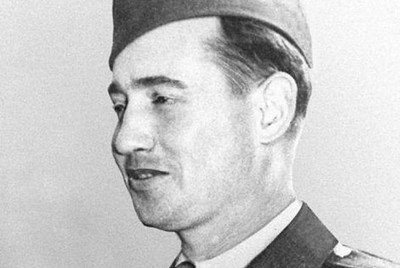 One soldier taking out a tank all by himself would be a big deal in any war, so imagine blowing up three in one day during World War II — that’s what Army Pfc. William A. Soderman did, and it earned him the Medal of Honor.

Soderman grew up in West Haven, Connecticut, and enlisted in the Army in August 1943, when he was 31 years old. He was eventually deployed to Europe, where he found himself involved in one of the bloodiest, most decisive battles of World War II — the Battle of the Bulge. The fight, which was for Belgium’s Ardennes Forest, began on Dec. 16, 1944, when Hitler’s troops began attacking exhausted American service members in the frozen woodland hills. It was the dictator’s last major stand against the Allies.

Soderman was with the 9th Infantry Regiment, 2nd Infantry Division, K Company during the nearly monthlong battle. On Dec. 17, 1944, his mission was to defend a key road junction near Rocherath, Belgium. Soderman was by himself when he heard enemy tanks heading his way. As the night grew dark, he calmly hid, waiting for them.

When the five tanks got within point-blank range, Soderman stood up, not caring about the intense firepower that could have blown him to bits, and fired his bazooka into the first tank. It immediately caught fire, forcing its crew to retreat.

The other tanks managed to get away before Soderman could reload, but he stayed in position all night — despite enemy fire — waiting for the next onslaught to come. Shortly after dawn, five more enemy tanks rolled into view. Soderman ran along a ditch to meet them, leapt into the road in full view of their gunners and fired again, disabling the lead tank. The other tanks couldn’t get around the crippled machine, so they withdrew.

On the way back to his post, Soderman attacked an enemy infantry platoon at close range, killing at least three Germans and wounding several others.

By now, his company’s position was no longer defendable, so they retreated to a safe location. But before long, Soderman heard enemy tanks approaching once again. He knew not everyone in the company had made it to safety, so he left his position of relative safety to meet the enemy head-on.

He shot his last rocket into the lead tank yet again, but before he could reach cover, machine gun fire ripped through his right shoulder. Seriously wounded, he had to drag himself along a ditch back to the American lines to be evacuated.

Soderman’s actions that day greatly contributed to the defense of Rocherath. For his efforts, he received the Medal of Honor, Nov. 1, 1945, from President Harry S. Truman.

Soderman eventually got married, had two children and spent the rest of his career working for a Veterans Affairs hospital in his hometown. He died and was buried there on Oct. 20, 1980. He was 68 years old.

Two Navy ships have been named in his honor: The cargo ship USNS Soderman was named for him in 2002.

A previous support vessel carried the same name. That ship was eventually decommissioned and renamed.