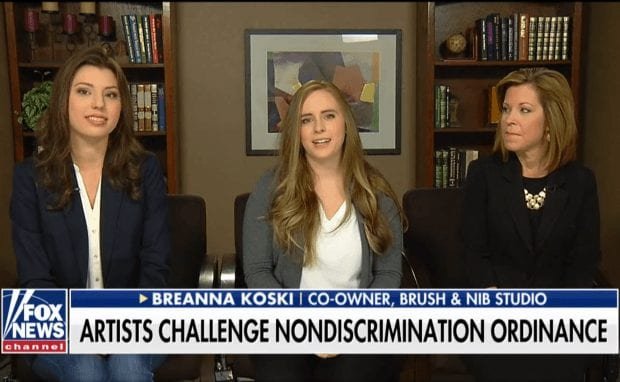 The Arizona Supreme Court is set to hear the case of two artists who say creating custom artwork for same-sex weddings would go against their religious values.

Co-owners of Brush & Nib Studio told ‘Fox & Friends’ Thursday about their challenge to Phoenix’s non-discrimination ordinance. Joanna Duka and business partner Breanna Koski filed a pre-emptive lawsuit in Arizona state court hoping to strike down the ordinance before it is used against them.

“It actually threatens to put them in jail for six months for every day they violate this ordinance,” Kristen Waggoner, the girls’ lawyer, said. “They shouldn’t have to wait to be thrown in jail to challenge an unjust law.”

The state of Arizona disagrees with Duka and Koski and is planning to defend the unfair ordinance.

“They want the court system to give them a blank check to refuse service to any same-sex couple that is requesting custom wedding products,” State Attorney Eric Fraser said in a separate interview. “There is no principled way to distinguish between discrimination on the basis on [sic] sexual orientation versus discrimination on other bases such as race or even religion.”

Wagonner refuted Fraser’s tired argument saying, “This old tired analogy to race is just a bankrupt analogy that the Supreme Court has rejected not once, but twice in the Obergefell same sex marriage decision as well as the Masterpiece Cake Shop decision.”