Democratic Missouri Sen. Claire McCaskill sparked a fierce backlash from a Democratic legislator in her home state after listing her as an example of a “crazy Democrat.”

In a scathing series of tweets on Monday and Tuesday, Missouri Democratic state Sen. Maria Chappelle-Nadal referred to McCaskill as “Dixie Clare,” described her as a “piece of shit,” compared her to a slave owner and accused “McCaskill and her racist democratic friends” of alienating the party’s base voters.

McCaskill raised eyebrows in the final weeks of the midterm campaign by running a radio ad that described McCaskill as “not one of those crazy Democrats.”

When pressed on Monday for examples of “crazy Democrats,” McCaskill pointed to Chappelle-Nadal, who sparked outrage in 2017 by calling for President Donald Trump’s assassination.

“We have a state Senator here in Missouri that actually advocated for the assassination of President Trump. That’s a crazy Democrat,” McCaskill said in an interview with Fox News’s Bret Baier.

“Claire McCaskill is desperate. She’s a piece of shit. Instead of knowing why people of color are angered by this administration, she chooses to put us [and] our families in harm’s way,” Chappelle-Nadal wrote in a tweet on Monday.

“If my family is harmed, blame it on Claire McCaskill. She deserves to lose. She is not a Democrat,” the state senator added.

“Claire McCaskill and her racist democratic friends continue to alienate the base,” Chappelle-Nadal wrote in a Tuesday morning tweet. In another, she referred to McCaskill as “Dixie Claire.” 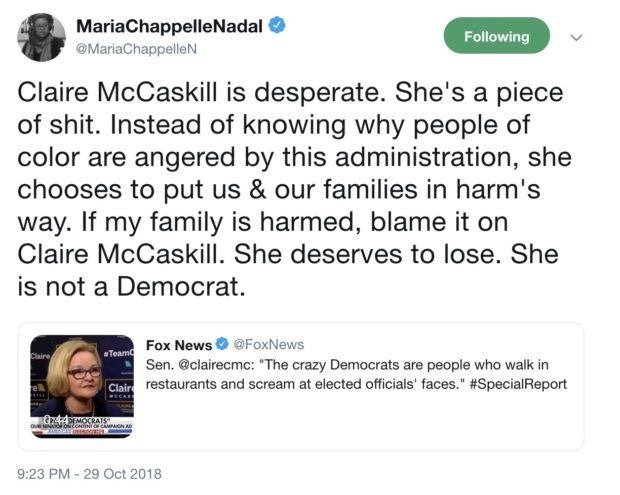 Chappelle-Nadal, who did not return an email seeking comment, also blamed McCaskill for multiple racist comments directed at her on social media. 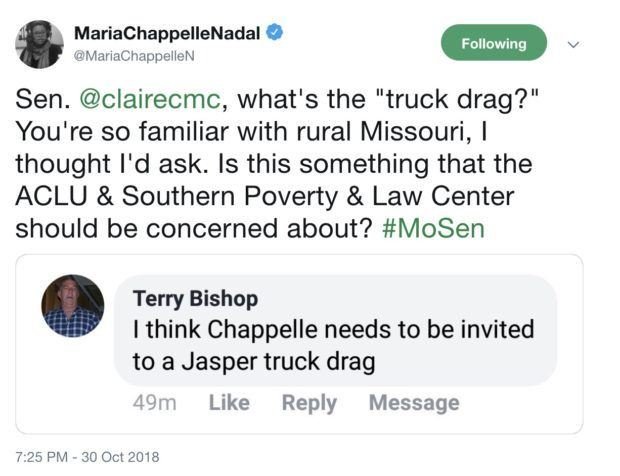 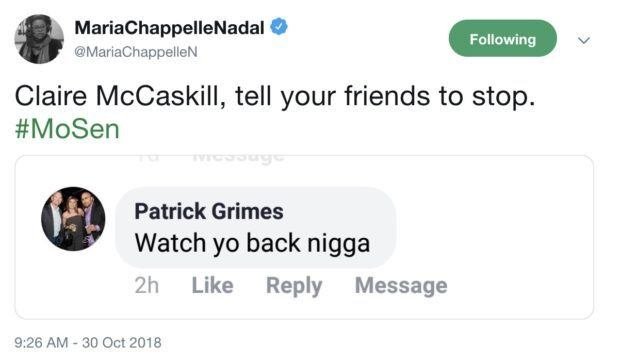 “White Supremacy would place a person of color in physical danger. That’s what Claire McCaskill has done to my family. Shame on you, Dixie Claire. There are no more plantations. You are not Madam Massa,” Chappelle-Nadal added in another tweet.

The McCaskill campaign did not immediately return a request for comment.

The controversy comes as polls show McCaskill slipping behind Republican challenger Josh Hawley ahead of the Nov. 6 midterm elections.

Missouri’s term limits for state legislators prevent Chappelle-Nadal from running for re-election as a state senator, so she is running for the state’s House of Representatives.

She won her primary in August and is running unopposed in the general election.

Missouri limits state legislators to eight years in each the House and Senate. Chappelle-Nadal is in her eighth year in the Senate and has two more years of eligibility in the lower chamber.

Support Conservative Daily News with a small donation via Paypal or credit card that will go towards supporting the news and commentary you've come to appreciate.
Tags
Claire McCaskill