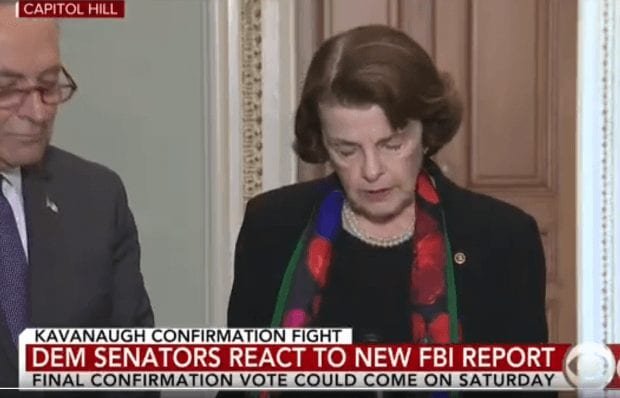 Democrats, the media and now the FBI have all tried and failed to find a single person to corroborate claims of sexual misconduct made against Judge Brett Kavanaugh. Instead of admitting to that failure, Democrats lashed out against the FBI for what they didn’t write in their report.

“My staff and I reviewed the FBI report into sexual assault allegations against Brett Kavanaugh,” Senator Dianne Feinstein (D-CA) told reporters. “The most notable part of this report is what’s not in it.”

“By ‘what’s not in it,’ Ranking Member @SenFeinstein must be referring to the total lack of corroborating evidence,” the committee posted.

What’s not in the report, according to Senate Judiciary Chair Chuck  Grassley, is any corroboration of allegations made by Ford, Swetnick or Ramirez – the three women claiming to have been attacked by Kavanaugh.

During her comments, Feinstein also complained that they were each only given five minutes to ask questions of Kavanaugh but, according to the committee, that’s what they asked for.

“And, for the record, Senate Judiciary Committee Democrats DEMANDED five minutes each,” the committee said in a tweet.

Feinstein and Senate Minority Leader Chuck Schumer both refused to take questions from the press likely to avoid any admission of their own failings during the confirmation process.

Democrats’ handling of Kavanaugh has turned sentiment against them just ahead of the November midterm elections. Their morally-bankrupt treatment of the Supreme Court nominee has ignited the Republican base and their failure to obstruct his nomination is tamping enthusiasm among their supporters.

Democrats are expected to continue bashing Kavanaugh, the FBI and anyone else who wants a fair process through which nominees are heard and voted upon. They have already promised to impeach Kavanaugh if he is confirmed which may well become the rallying cry for Republicans and conservatives who will go to the polls to protect his seat on the court. 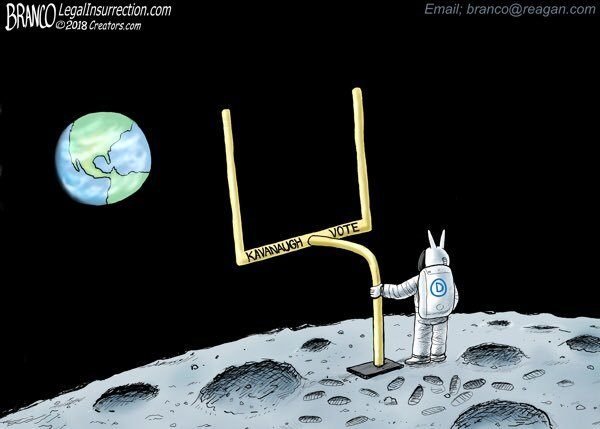 Support Conservative Daily News with a small donation via Paypal or credit card that will go towards supporting the news and commentary you've come to appreciate.
Tags
Brett Kavanaugh Dianne Feinstein