Christine Blasey Ford, who has accused Judge Brett Kavanaugh of sexual misconduct, has an ex-boyfriend that doesn’t think she told the truth when she testified to Congress – among other, not so honest, things.

Ms. Ford taught a friend how to “prepare for” a lie detector test, isn’t afraid to fly, has no problem using a credit card that isn’t hers and lying about it, or cheating on her boyfriend, according to a sworn statement by a man claiming to have been in a long-term relationship with her.

During their time together, the ex-boyfriend watched Ford help a friend “prepare for a potential polygraph exam,” and explain “how polygraphs work.” This stunning observation shakes Ford’s testimony that she had “never” coached anyone that was going to submit to a polygraph.

During some of the time we were dating, Dr. Ford lived with Monica L. McLean, who I understood to be her life-long best friend,” the letter read. “During that time, it was my understanding that McLean was interviewing for jobs with the FBI and the US Attorney’s Office. I witnessed Dr. Ford help McLean prepare for a potential polygraph exam. Dr. Ford explained in detail what to expect, how polygraphs worked and helped McLean become familiar and less nervous about the exam. Dr. Ford was able to help because of her background in psychology.

In response to the new information that further damages Ford’s credibility, Senate Judiciary Committee Chairman Chuck Grassley has demanded that her attorneys turn over all relevant and supporting documentation from the polygraph.

Ford’s ex-boyfriend’s testimony also poked holes in her claims to be afraid of flying, fear of small spaces and her supposed need to live in homes with more than one front door.

We traveled around the Hawaiin islands including one time on a propeller plane. Dr. Ford never indicated a fear of flying. To the best of my recollection, Dr. Ford never expressed a fear of closed [sic] quarters, tight spaces, or places with only one exit,” he said. “She ended up living in a 500 sq. ft. house with one door.”

The man issuing the sworn statement said that he knew Dr. Ford from about 1989 and was in serious relationship with her until 1998. Afterward, he only spoke with her to deal with fraudulent charges she then put on his credit card. The relationship had ended after Ford cheated on him.

In direct refutation of Ford’s claims about telling several people that Kavanaugh had assaulted her, her ex-boyfriend says not only did she never mention Kavanaugh, but during their 11-year relationship, she never even mentioned having been sexually assaulted.

“During our time dating, Dr. Ford never brought up anything regarding her experience as a victim of sexual assault, harassment, or misconduct,” he said in the statement. “Dr. Ford never mentioned Brett Kavanaugh.” 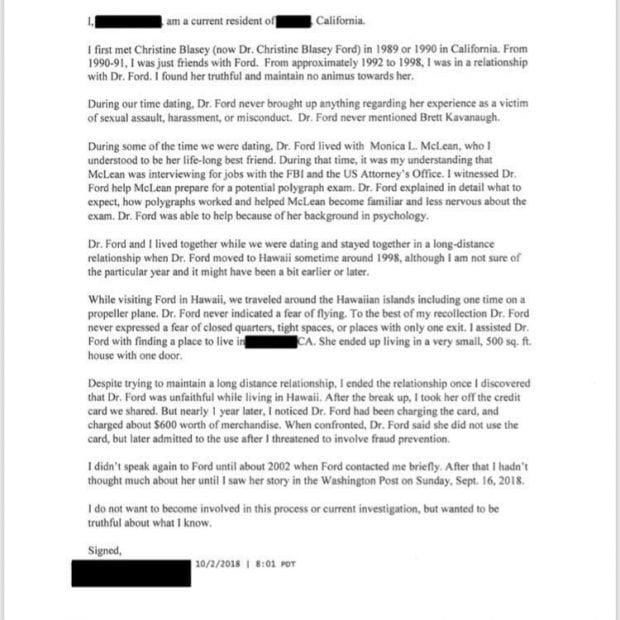