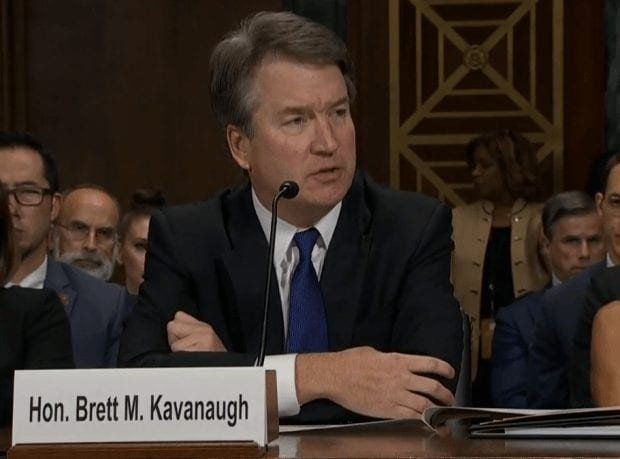 36 hours… yup, that’s all it took for the progressive elite to find something about the FBI’s investigation into sexual misconduct claims against Judge Brett Kavanaugh.

Left-leaning NBC News reported that the White House has limited the scope of the FBI’s supplemental background check investigation to only claims with at least some merit, which leave out Julie Swetnick’s outrageous drug-dealing, punch-spiking, gang-rapist allegations against Kavanaugh.

While the FBI will examine the allegations of Christine Blasey Ford and Deborah Ramirez, the bureau has not been permitted to investigate the claims of Julie Swetnick, who has accused Kavanaugh of engaging in sexual misconduct at parties while he was a student at Georgetown Preparatory School in the 1980s, those people familiar with the investigation told NBC News.

Sen. Jeff Flake, Republican of Arizona, who led an 11th hour move in the Senate committee for an FBI inquiry, said he thought the bureau would decide how to carry it out.

On Friday, Flake told reporters that “They’ll have to decide — the FBI you know, how far that goes. This is limited in time and scope and I think that it’s appropriate when it’s a lifetime appointment and allegations this serious and we ought to let people know that we’re serious about it.”

But, as expected, the lawyer for Christine Blasey Ford set the groundwork for a Democrat party revolt against the investigation they demanded.

Debra Katz, a lawyer for Christine Blasey Ford, said on Friday that “artificial limits” should not be placed on the FBI as it reopens its background investigation into Supreme Court nominee Brett Kavanaugh.

“No artificial limits as to time or scope should be imposed on this investigation,” Katz said in a statement.

While NBC is all about pushing it on the White House, the administration says that the scope came from the Senate Judiciary Committee, of which Flake is a member.

“The scope and duration has been set by the Senate,”  White House Deputy Press Secretary Raj Shah told reporters. “The White House is letting the FBI agents do what they are trained to do.”

The president even chimed in saying that NBC got it wrong … again!

NBC News incorrectly reported (as usual) that I was limiting the FBI investigation of Judge Kavanaugh, and witnesses, only to certain people. Actually, I want them to interview whoever they deem appropriate, at their discretion. Please correct your reporting!

Prepare yourselves, this will be the reason Senate Democrats demand another delay on Friday after the FBI investigation reveals absolutely nothing.

Support Conservative Daily News with a small donation via Paypal or credit card that will go towards supporting the news and commentary you've come to appreciate.
Tags
Brett Kavanaugh The White House