“Social Media is totally discriminating against Republican/Conservative voices,” Trump posted on Twitter. “Speaking loudly and clearly for the Trump Administration, we won’t let that happen. They are closing down the opinions of many people on the RIGHT, while at the same time doing nothing to others. Censorship is a very dangerous thing & absolutely impossible to police.”

The president’s comments came after Prager University, a conservative media organization, showed that Facebook had censored their content.

“We’re being heavily censored on @Facebook. Our last 9 posts are reaching 0 of our 3 million followers. At least two videos were deleted last night for ‘hate speech’ including our recent video with @ConservativeMillen,” PragerU tweeted.

One of the videos removed for “hate speech” was one titled “Make Men Masculine Again” in which a female commentator makes the case that men being manly is not the terrible disease liberals would have people believe.

We mistakenly removed these videos and have restored them because they don't break our standards. This will reverse any reduction in content distribution you’ve experienced. We’re very sorry and are continuing to look into what happened with your Page.

Does anyone really believe that Facbook’s censorship of PragerU was accidental? Either way, the president wasn’t happy about it.

“If you are weeding out Fake News, there is nothing so Fake as CNN & MSNBC, & yet I do not ask that their sick behavior be removed,” he tweeted. “I get used to it and watch with a grain of salt, or don’t watch at all. Too many voices are being destroyed, some good & some bad, and that cannot be allowed to happen. Who is making the choices, because I can already tell you that too many mistakes are being made.”

“Let everybody participate, good & bad, and we will all just have to figure it out!” he added. 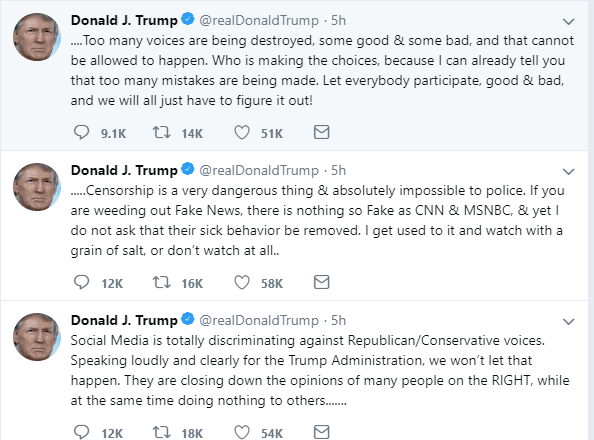 Trump isn’t the first government official to consider action against social media censorship. Earlier this week, it was reported that a U.S. House committee considered a subpoena for Twitter’s CEO, Jack Dorsey.

An unnamed staffer on the House Energy and Commerce Committee told Politico that it is considering issuing Dorsey a subpoena to testify before the panel after a “tense” meeting with representatives Thursday, Politico reported.

It’s unclear what actions the Trump administration or Congress can or will take, if any. Social media platforms are private property and conservatives are not a protected class so discrimination of right-leaning content is not illegal. Since it is not the government squashing conservative voices, the First Amendment is not in play either. Unless Facebook, Twitter and Youtube’s censorship of the right costs them money through negative customer reaction, it is unlikely that the behavior will change.