Julie Rodgers, described by the Washington Post as “a writer, speaker and advocate for LGBTQ people in faith communities”, has offered a “compromise” proposal to Christians designed to end the cultural war between believers and alphabet soup alternate lifestyle advocates.

It rivals Gen. Ulysses S. Grant’s surrender terms at Fort Donaldson in its lack of generosity and sweeping demands.

In 1862 the commander of Fort Donaldson asked Gen. Grant for terms. Grant replied, “no terms except an unconditional and immediate surrender can be accepted. I propose to move immediately upon your works.” 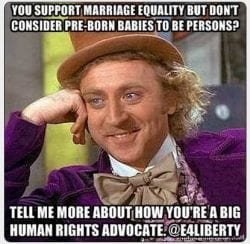 Christians haven’t asked for surrender terms from lifestyle heretics even though the church has been under ceaseless attack from leftists who would outlaw all religion, joined by therapeutic Christians who place feelings ahead of biblical doctrine.

Lack of interest didn’t prevent Rodgers from offering to “bridge this divide.”  Peace will reign if Christians agree to submit to any and all “affirming” demands from the Legions of License. This submission includes every realm of life outside the church; and Rodgers gives the impression there are plans for the future there, too.

Once Christians toe the line, Julie and her allies won’t move immediately on churches’ tax–exempt status.

Frankly, I’m not ready to sell my Christian birthright for a mess of tax breaks, even if Rodgers could be trusted to keep her end of the bargain.

Julie’s dishonesty is evident only 66 words into her manifesto. She refers to believers who adhere to biblical doctrine with a 2,000 year old pedigree as “conservative Christians.” Her intent is to marginalize the great majority of believers and characterize them as out of the mainstream and possibly Republican.

The correct term for congregations who believe God opposes sexual deviancy and considers the bond of marriage to be limited to one man and one woman, is ‘Christian.’

The accurate term for those who hold opposing beliefs is ‘heretic.’

In Rodgers eyes Christians are doubly guilty because of what they believe and their attempt to live their faith — which hurts the feelings of the heretics.  This means I have bad news for Julie. God doesn’t care about your sexual orientation celebration. He cares about your soul’s ultimate salvation.

Julie has written that the Bible needs to keep up with the times. “Both sides are sincere Christians and view the Bible as authoritative––they just differ on how the Bible, which was written in a patriarchal context in the 1st century, should apply to empowered women in the 21st century.” Translated, this means Jesus would approve of alphabet lifestyles in the church and homosexual marriage if He just had access to all the facts, like Julie does.

The heretics want to divide the Body of Christ by using the pejorative term ‘conservative’ for mainstream believers, while at the same time dividing the Apostles by making Paul a TEA Party Republican. That way it’s easier to ignore his obvious instruction on marriage and homosexual practice.

Julie, who’ll be marrying another woman any day now, is confused by Christian reluctance to jettison orthodox biblical belief on her sayso, “It became hard for me to understand what exactly was driving traditional teaching on marriage if it was not fear of change––a very particular kind of fear that’s often expressed through homophobia.”

But which side is the aggressor here? Are Baptists suing florists who provide centerpieces for same–sex weddings? How about bakers who put two men on the top of the wedding cake? Or photographers who memorialize the ceremony?

Rodger’s writes, “It’s not hard to understand why LGBTQ people don’t trust conservative Christians enough to work toward a compromise.” But what Julie offers isn’t a compromise, it’s a demand for submission.

Christian churches don’t single out the consonant crusaders. Churches are opposed to obvious and flagrant adulterers, incest practitioners, polygamists and couples shacking up, assuming the churches are aware of the transgressions.

Julie’s allies make it a point to be flagrant and then object to the predictable consequences. Her disingenuous ‘peace’ proposal is a demand Christians stop following Christ and start following the culture.

Rodgers assures us becoming party to her apostasy will be painless, “The most conservative Christians can joyfully provide services to people they think are sinful without violating the spirit of Scripture.”

Which is true. I cheerfully provide personal services to a sinner when I brush my teeth at night. What I believe Christians won’t provide, joyfully or otherwise, is validation and celebration of practices that purposely insult the God we worship and the faith we practice.