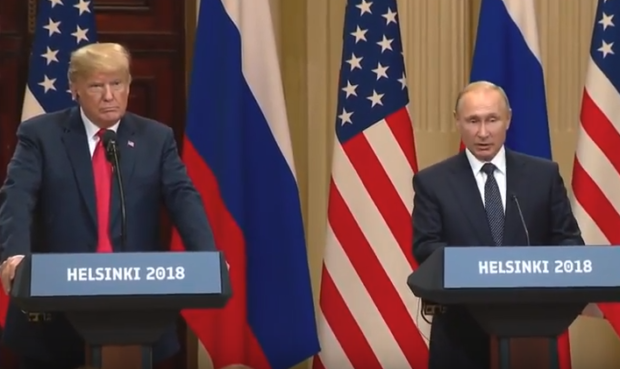 Yesterday’s Trump – Putin Summit news conference brought out a new level of craziness in the anti-Trump Democrats, self-appointed foreign policy experts in the media and their fellow travelers among #NeverTrump Republicans.

What seems to have enraged President Trump’s opponents the most is that their attempt to hijack the summit to focus on the phony charges that President Trump colluded with the Russians to win the 2016 election failed, and that Trump and Putin focused on important bilateral issues, such as nuclear weapons, the denuclearization of North Korea, the war in Syria, and energy trade between Russia and Western Europe.

Journalists and many republicans chastised Trump for not holding Putin for aggression on the world stage and for meddling in the election. If Trump did that can you imagine the reaction from Putin? Matters would be much worse and there would be hell to pay by Putin. You have to be diplomatic when dealing with people like Putin and Kim in North Korea and that is just what Trump is doing. I would like to inform these critics that we have had our share of aggression on the world stage in the Middle East and Vietnam and other places and Obama tried meddling in Isreal’s elections to get Netanyahu out. It’s easy for these journalists to sit behind their keyboards and criticize Trump. I bet it would be a different sotry if they were in Trump’s shoes then again matters might be worse than they are now. Trump doesn’t take orders from anyone and is a true leader that loves his country and top negotiator. These things the average person and so called journalists doesn’t understand. Like Trump said in England, “These people aren’t going to like whatever I do” and that is so true.

Journalists entered the press conference expecting Trump to denounce Putin for alleged election “meddling.”When asked about so-called election “meddling,” President Trump pivoted to the fact that there is no evidence the Democrats were hacked. Trump reminded the liberal journalists in attendance that the Democrats refused to turn over their server to the FBI. Without an independent investigation of the server, it is impossible to prove the Democrats were hacked. President Trump also said both the United States and Russia are to blame for sour relations between the two countries.

Journalists flipped out. They revealed what motivates them about this story is their pure, unadulterated hatred of President Trump. But instead Trump pointed out that it’s the media who are spreading conspiracy theories with no basis in reality.

Did people want Trump to start a war with Russia over some highly skeptical indictments of 12 Russian agents? That is really stupid. Can’t anyone see that this is grasping at the last straw for Meuller and Rosenstein. They both know they are going down the tubes and they created 12 indictments they knew could never be proven. They just wanted to create an atmosphere of distrust for the summit.

What Democrats, Trump critics like Senator John McCain, and Witch Hunters like Robert Mueller wanted President Trump to do would jeopardize the lives and safety of American military and intelligence officers around the world and make international relations infinitely more complex and difficult.

In his press interview with Sean Hannity, Trump said that Putin told him that Putin and his investigators would WELCOME Mueller to come to Russia and even stated that Russia would be willing to extradite the people who “interfered” if there was sufficient evidence.

We don’t really know how Putin would react if there was evidence. Mueller does not speak Russian of course, but there are a number of translators who would be willing to go.

Those calling out President Trump for not accusing Putin of hacking the 2016 election are pure idiots consumed with hate for Trump. They have no definitive proof that the DNC server was hacked by Russia, in fact the server was denied access to the FBI and now cannot be located –  sounds rather suspicious to me.

Senior reporter Dan Rather even got in on the attack saying:

The President of the United States trusts the word of a former KGB agent over the consensus of the American intelligence community backed by a ton of facts. That is a shocking reality. Everyone who excuses Trump’s behavior must answer that now, and when history inevitably judges.

“The President of the United States trusts the word of a former KGB agent over the consensus of the American intelligence community backed by a ton of facts,” Rather tweeted. “That is a shocking reality. Everyone who excuses Trump’s behavior must answer that now, and when history inevitably judges.”

Dan Rather, where is the ton of evidence?? They have been investigating for over a year and nothing has been brought out…I didn’t think Dan Rather was still alive much h less around.

Not only has Mueller been investigating for over a year, but the NYT put over 20 reporters on then candidate Trump, the day he announced his intension to run, looking for dirt. So it comes out to way over 2 years and nothing.

Yes, there is a ton of evidence… on Hillary colluding with Russia. How about her signing off with nine other groups the selling of 20% of our uranium to them for $145 million to her foundation. Uranium that can be used to make atomic weapons to be used against us. Did they forget how she paid a foreign national with Russian connections, Christopher Steele a million dollars funneled through a law firm Fusion GPS to write a phony dossier on trump? Do they not remember how Bill doubled his speaking fees from $250,000 to $500,000 for a half hour speech over there? Do they conviently forget that this Russian meddling happened under Obama?

If they want to talk meddling, Russian collusion and treason, then Hillary and Obama is where you look, but they won’t dare do that since she is their girl who should be president as far as they are concerned.

As far as Trump – Russia collusion – a ton of nothing = nothing.

Trump says he meant the opposite when he said in Helsinki that he doesn’t see why Russia would have interfered in the 2016 U.S. elections.

Back at the White House on Tuesday, the president told reporters that he said he meant he doesn’t see why Russia “wouldn’t” be responsible.

He also said he accepts the American intelligence community’s conclusion that Russia interfered in the election, but he denied that his campaign had colluded in the effort.

Trump spoke a day after returning to the U.S. to nearly universal condemnation of his performance at Russian President Vladmir Putin’s side in Helsinki. Putin said he wanted Trump to win the race against Democrat Hillary Clinton.

However, Vladimir Putin made a bombshell claim during Monday’s joint press conference with President Trump in Helsinki, Finland, when the Russian president said some $400 million in illegally earned profits was funneled to the Clinton campaign by associates of American-born British financier Bill Browder – at one time the largest foreign portfolio investor in Russia. The scheme involved members of the U.S. intelligence community, said Putin, who he said ‘accompanied and guided these transactions.’”

The report explained the situation developed after an offer from Russia to allow special counsel Robert Mueller’s team to come to Russia for their investigation – as long as there was a reciprocal arrangement for Russian intelligence to investigate in the U.S.

Putin continued, “It might have been legal, the contribution itself but the way the money was earned was illegal. So we have solid reason to believe that some [U.S.] intelligence officers accompanied and guided these transactions. So we have an interest in questioning them.”

The report cited comments from Philip Giraldi of the Strategic Culture Foundation that ascribed to Browder fault for the new Cold War. He’s described there as “a hedge fund operator who made his fortune in the corrupt 1990s world of Russian commodities trading.”

Support Conservative Daily News with a small donation via Paypal or credit card that will go towards supporting the news and commentary you've come to appreciate.
Tags
media bias Vladimir Putin