The long-awaited Inspector General’s report on the FBI investigation of Hillary and her e-mails is a grave disappointment. Everyone knows she committed multiple felonies yet the report says there was no political bias by the FBI when the report itself shows bias throughout:

3) She acid washed her hard drive with bleach bit.

4) She had aids destroy her federally subpoenaed mobile devices with hammers.

5) She removed the sim cards from federally subpoenaed e devices.

She should have been charged on all counts, but this corrupt cabal at the top of the FBI ran interference for her to assure that she got the nomination and became president and Trump didn’t. This is the grossest act of abuse of power ever conceived.

The report also faults the FBI – and specifically Agent Peter  Strzok – for not acting quickly enough after the discovery of Clinton emails on the laptop of ex-Rep. Anthony Weiner in the fall of 2016. The report says Strzok and others argued that the Russia investigation was a “higher priority” at the time than reviewing the laptop.  Even though the report found blatant bias and that some senior bureau officials exhibited a certain willingness to take official action to hurt Trump’s chances to become president, Strzok’s boss, Comey had no political bias. Yeah right!!!  It was Comey and Strzok who wrote the letter exonerating Hillary before they interviewed her and17 other witnesses.  Comey went rogue and he and Strzok wrote up the letter exonerating her in May and interviewed her on July 3rd and on July 5th she was exonerated.

The IG Report is a total disaster for Comey, his minions and sadly, the FBI. Comey will now officially go down as the worst leader, by far, in the history of the FBI. I did a great service to the people in firing him. Good Instincts. Christopher Wray will bring it proudly back!

In the interview with Fox’s Steve Doocy, Trump made it clear he considered Comey the leader of those “minions. “I think Comey was the ringleader of this whole den of thieves,” Trump said. “I mean just the scum on top, not the whole FBI .”

Michael Horowitz’s report faulted Comey for going over the heads of his superiors, including former Attorney General Loretta Lynch, by holding a press conference to announce the FBI’s decision not to press criminal charges against Clinton. At that July 2016, news conference, Comey called the then-presidential candidate’s actions “extremely careless,” rather than “grossly negligent,” as drafted in the initial exoneration statement. This changes the charges against Hilary. If Comey charged her as originally intended with “Grossly negligent” she could be charged criminally, but it was Loretta Lynch who urged him to change it to extremely careless so she isn’t charged.

The IG report also focused on political bias within the bureau—specifically referring to FBI officials Peter Strzok and Lisa Page, who first came under scrutiny in December over a series of politically-charged, anti-Trump text messages they exchanged. The inspector general released new text messages between the two—who were having an affair in 2016 were also plotting to keep President Donald Trump from winning the election suggesting that they would “stop” Trump from becoming president.

“FBI Agent Peter Strzok, who headed the Clinton & Russia investigations, texted his lover Lisa Page, in the IG Report, that ‘we’ll stop’ candidate Trump from becoming President.  Doesn’t get any lower than that!” Trump tweeted.

The report noted that it was specifically concerned about text messages exchanged between Strzok and Page that “potentially indicated or created the appearance that investigative decisions were impacted by bias or improper considerations.”

Strzok and Page, who were romantically involved, both served for a short period of time on Special Counsel Robert Mueller’s Russia investigation team. Strzok was reassigned following the revelations of his anti-Trump texts. Page resigned from the bureau last month.

It was Strzok who along with Comey wrote the exoneration of Hilary before they even interviewed her. Strzok was a lead investigator on the Clinton case and later worked the Russia investigation before being removed from that assignment.

The inspector general’s office uncovered numerous messages that “appeared to mix political opinion with discussions about the MYE investigation.” MYE, or “Midyear Exam,” was the code used in the FBI to refer to the investigation into Clinton’s private email server.

This shows a two-tiered justice system. One for them and Hilary and another for Trump and the rest of us.  They treated Hillary with white gloves and Trump with heavy-handed treatment. And Horowitz says there was no bias?

Now, new allegations have surfaced from within joint congressional investigations into the handling of former Secretary of State Hillary Clinton’s email scandal.

“Documents provided to the Committees show foreign actors obtained access to some of Mrs. Clinton’s emails — including at least one email classified ‘Secret,’” the memo states.

In a July 2016 statement on the matter, then-FBI Director James Comey referenced the potential of such an email breach by the nation’s enemies, “We do assess that hostile actors gained access to the private commercial email accounts of people with whom Secretary Clinton was in regular contact from her personal account,” he said.

According to Strzok’s 2016 email, any security breach of Clinton’s private email server could have been completed without leaving a digital fingerprint. “It is also accurate to say that a sophisticated foreign actor would likely have known about her private email domain, and would be competent enough not to leave a trace if they gained access,”

This is why you don’t have a private server while holding a high office. Now Hilary is guilty of allowing foreign countries access to her e-mails which contained highly classified information. It is estimated at least five countries hacked into her server and got that information.

According to the inspector general report, President Obama was one of 13 select individuals who had “direct contact” with Hillary Clinton on her private email account.  Absolving the former president, at least somewhat, intelligence analysts determined none of Obama’s correspondence with the then-Secretary of State contained classified information.

However, Obama said in an interview with CBS News in 2015 that he learned about Hillary’s private server and potential misuse of top-secret intel about “the same time everybody else learned it, through news reports.”

“The president, as I think many people expected, did over the course of his first several years in office, trade emails with the secretary of state,” he said.

It has also since been revealed that Obama had a private server also and was communicating with Hillary on her private server even though he covered up and said he learned about it from the media like everyone else.

Elsewhere in the IG report, the IG asked investigators why they made no effort to obtain the personal devices that Clinton’s senior aides were using at the State Department since those devices were “potential sources of Clinton’s … classified emails” or places where unauthorized classified emails were being stored.

In response, officials on the probe claimed that “the culture of mishandling classified information at the State Department” was so pervasive that it “made the quantity of potential sources of evidence particularly vast” — a rationale that the IG implied was unconvincing, because investigators could simply have obtained personal devices for a handful of key Clinton aides.

It would be sweet justice and perfectly in character for all of them to turn on each other to save their own slimy skins. It would be great theater too.

Our country has been thriving since President Trump took office in 2016, unemployment rates went down, international relations have had America first, and the economy has improved. Yet with all these accomplishments, liberals want to stomp their feet and whine over their beloved Hillary losing, and a successful conservative occupying the Oval Office. It’s time they got over it and joined in for the sake of the country and everyone in it since they are the ones who always whine about unification. 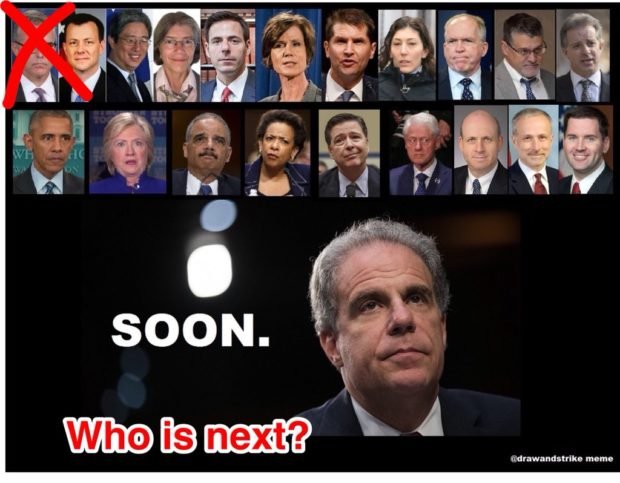 What is Nancy’s Endgame – Conservative View from New Hampshire