Democrats and Republicans have two very different answers to end child separations that occur when adults are charged with illegally entering the United States. One seeks to strengthen enforcement of immigration law the other hopes to continue the last administration’s policy of just ignoring it.

There are only a small set of cases in which children are separated from their parents. Some result in separations of a day or less, others for much longer:

The second case, claiming asylum, has become vastly abused in recent years. Open borders activists and most of the Democratic party made public that illegal aliens need only claim “fear of persecution” and have children with them if they want to get into the United States. Under the previous administration, that actually worked.

Asylum claims have exploded 1,750% over the past five years with more than 311,000 pending asylum cases of of January 2018. The caseload has reached “crisis level” according to the U.S. Citizenship and Immigration Services (USCIS). 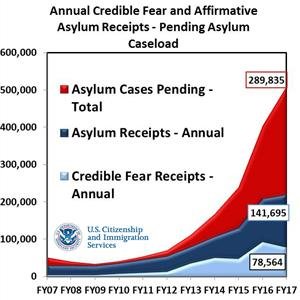 Previous administrations chose to release the illegal aliens claiming asylum into the United States while their case awaited trial. Only 10% ever showed up for court. And USCIS says that any delays in processing asylum claims are a threat to our system and national security.

“Delays in the timely processing of asylum applications are detrimental to legitimate asylum seekers,” said USCIS Director L. Francis Cissna. “Lingering backlogs can be exploited and used to undermine national security and the integrity of the asylum system.”

The proper way to claim asylum is to do so in the first neutral country reached. Since most illegal aliens are coming from Guatemala, Honduras, Nicaragua and El Salvador, the U.S. Embassy in Mexico City could serve that purpose. But they aren’t looking for asylum, they’re gaming the system. So they bring kids, not necessarily their own, when they cross the border in hopes of abusing a loophole made worse by the Flores Consent Decree and a Ninth Circuit case. It worked until the Trump administration clamped down on the abuse and began a zero-tolerance policy for those entering the United States illegally. Now, under Trump, the children are separated from the adults so that they can be put in childcare facilities while the adults await adjudication of their asylum claims. No more catch-and-release.

How the Democrats want to end child separation

Senator Diane Feinstein (D-CA) introduced S. 3036 – the Keep Families Together Act – which uses emotional language to force catch-and-release of illegal aliens into the interior of the United States and promotes the practice of migrants and human traffickers bringing children on the 1,000-mile journey through hell to gain unlawful entry into the U.S. The journey is fraught with rape, murder, thievery, child sex trafficking and more. It’s a journey no child should undertake and bad legislation like this will only encourage more adults to bring their children or human traffickers to steal more children for just this purpose.

The bill makes it illegal to separate a child from parents or legal guardians within 100 miles of the border with limited exceptions. It makes no provision to end the reason children are separated – abuse of our asylum laws that is flooding the immigration court. 90% of all asylum claims are rejected, but before Trump’s zero-tolerance policy, those illegal aliens were set free inside the U.S., never to return to court and are rarely deported.

The bill also ties the hands of federal authorities adding a collection of reports and letters they must write in addition to their current duties. Nothing about this solves the underlying disease of which child separation is only a symptom.

Senator Ted Cruz (R-TX) has proposed a bill that would attack the root of the problem – the systemic abuse of asylum law.

“The answer is not what congressional Democrats are proposing: simply releasing illegal aliens and returning to the failed policy of ‘catch and release.,’” Cruz said in a statement. “Rather, we should fix the backlog in immigration cases, remove the legal barriers to swift processing, and resolve asylum cases on an expedited basis.”

His bill, the Protect Kids and Parents Act, will:

Not only will this end the tactic of overwhelming the U.S. immigration courts to gain illegal entry into the United States, it will discourage the act of bringing children on the dangerous journey across Central America. This will end the separation of children from the illegal alien parents, quickly dispatch cases where asylum is requested and return those wrongfully claiming asylum to their homes.

Cruz’s bill has not yet been introduced to the Senate so the full text of the legislation is not yet available. We will update this article once the bill is posted.

The Democrats bill is 100% can-kicking, do-little, emotionally-charged, recklessness. It will cause the immigration courts to be further overwhelmed and functionally eliminate the southern border for illegal aliens who bring children with them. More women and children will be raped on the horror-show of a journey across Central America. More women will be put into sex slavery and more children will be illegally trafficked for various purposes – including the sex trade. The Democratic proposal will encourage dangerous actions that will put more children in harm’s way. It is clearly not the answer.

The Republican proposal is a logical, ethical and legal way to stem the tide of illegal alien adults bringing children into the United States in hopes of abusing the asylum system. In short order, the word will get out and migrants and traffickers will have little motivation to string children along the perilous journey. In fact, many migrants will no longer make the trip once it is clear that entry is only granted to those who actually need asylum.

Support Conservative Daily News with a small donation via Paypal or credit card that will go towards supporting the news and commentary you've come to appreciate.
Tags
catch and release Illegal Aliens Illegal immigration