Jordan Peterson, a Canadian professor of psychology at the University of Toronto, is enjoying some measure of fame and its attendant notoriety for boldly coming out in support of common sense. He’s even steadfast enough to continue his support when it conflicts with edicts from the leftist Speech Police.

This would be courageous at a US university, but it becomes almost foolhardy at a Canadian college. 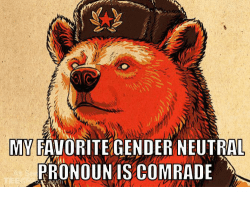 Columnist John Stossel writes that when asked about an entirely hypothetical — for now — law that “would require everyone to call people by the pronoun they prefer — pronouns like “ze” instead of “he” or “she”, Peterson said he would refuse to obey.

I’m with Peterson on this. I can’t even get my relatives and fellow Baptists to call me by the correct proper name of ‘Michael,’ instead of ‘Mike,’ so why should strangers have the power to compel pronouns by force of law?

Peterson’s reasoning is sound. “I don’t care what people want to be called. But that doesn’t mean I should be compelled by law to call them that. The government has absolutely no business whatsoever ever governing the content of your voluntary speech.”

I would assume for Peterson that includes ‘hate’ speech and ‘he’ speech.

Naturally this perfectly reasonable position tripped the outrage alarm on his campus. Hundreds of easily–herded academics signed a petition calling for Peterson to be fired by the university. And students who are happy to extend toleration to any ideology with which they agree and condemn any they dislike, now bring bullhorns to Peterson’s speeches to drown out his impure thinking.

I’ve been giving some thought to where these fascists got the idea it was permissible to control someone else’s language and I’ve come to the conclusion they are merely aping their corporate overlords.

Monkey see, monkey say, if you will.

In my opinion the seed for this preposterous language control was planted in 2006 when Nintendo introduced its new gaming system, the Wii. Starting with the product rollout Nintendo caused controversy in my house as I displayed a Peterson–like resistance to corporate control of my vowels. Standard English pronunciation rules dictate ‘W–i–i’ is pronounced ‘W–eye’, with both ‘i’s being long.

Not so, according to Tokyo. Wikipedia informs us the Japanese decided ‘W–i–i’ was to be pronounced “W–ee” and the wikis even had the gall to use the preexisting English word ‘wee’ (meaning small) to illustrate how Nintendo wanted the name of their authoritarian Wii to be mispronounced.

Nintendo’s excuse for butchering the pronunciation of the language and fomenting disrespect among my children was the “two lower-case “i” characters are intended to resemble two people standing side-by-side, representing players gathering together…”

Instead, it looks to me like two intimidated customers cowering under the baleful glare of the boss–like Big W.

Even today when I use standard English pronunciation for ‘Wii’ I’m either instantly instructed to mispronounce the name or given an indulgent smile while my wife is asked if I display any other symptoms of Old Timer’s Disease.

Evidently, I should have made a bigger stink in 2006. Possibly held a demonstration in front of the Japanese embassy in Washington. Claimed Nintendo was “wii wii–ing on our language.” Enlisted the help of English teachers and speech therapists.

Now it’s just a short step from “Wii” control to “ze” control. I can understand how deluded people, who feel they are a woman in a man’s body, might live with a certain level of anger. It’s not like they can return to the customer service desk at the hospital and demand a new body.

What I don’t like is taking out their frustration on the rest of us and recruiting a pack of braying donkeys to make us conform.

Dragooning pronouns into a ginned up political controversy to give abnormals more power over normals will either push the culture one step closer to a not so soft totalitarianism or add more velocity to a potentially dangerous backlash.

Anthony Esolen, an author I admire, recently remarked on the class of individual that seeks to bend the culture to its constantly proliferating set of rules and regulations for the leftist life: “The politicization of everything makes human life unlivable. These people are a hundred times worse than what they believe Joe McCarthy to have been: they are censors without self–restraint, Puritans without God, libertines without pleasure, and eternal politicians without the least sense of what a polis really is. I would not call them a nest of vipers, because vipers are at least respectable in their straightforward malignity. They are a seething mass of poisonous worms.”