President Donald Trump continues with his promise to make America great again and succeeding. That’s the difference between a businessman and a politician. A businessman like Trump gets things done while a politician just talks the talk. Thanks to Trump’s policies of lowering taxes and reducing regulations the U.S. economy is forecast to expand at a 4.8 percent rate in the second quarter, the Atlanta Federal Reserve’s GDP Now forecast model showed on Friday.

The overall unemployment rate has fallen to levels rarely seen in the historical data. Last month, the official “headline” jobless rate fell to the lowest level since the end of the ’90s Internet boom, which lasted a decade. The last time it was lower was in December 1969, at the tail end of a nearly nine-year boom that ended in 1970 and the jobless rate may go lower still.

The forecast has been climbing higher following the release of a series of good economic data. On May 25, the measure foresaw four percent GDP growth. This rose to 4.7 percent Thursday and ticked even higher on Friday following the better than expected jobs report for May.

“The fundamentals all look very solid right now,” said Gus Faucher, chief economist at PNC. “You’ve got job growth and wage gains that are supporting consumer spending, and tax cuts as well. There’s a little bit of a drag from higher energy prices, but the positives far outweigh that. Business incentives are in good shape.”

“May’s rebound in jobs, together with yesterday’s report of solid income growth and yesterday’s report of solid income growth and the rise in consumer confidence points to the economy functioning very well,” the National Retail Federation’s chief economist, Jack Kleinhenz, said in a statement. “Solid fundamentals in the job market are encouraging for retail spending, as employment gains generate additional income for consumers and consequently increase spending.”

Friday’s monthly employment report was great news for anyone looking for a job in America – unless you happen to be a Democrat running for Congress.

Yes, the economy is booming, the unemployment rate dropped to 3.8%, the lowest in 20 years, and America is experiencing the lowest African American and Hispanic unemployment in history. Compared to that, Obama’s unemployment record was pathetic. Under Trump, we’re headed for 4% GDP growth and beyond.

Today, consumer confidence is at a 17 year high while Obama only managed a record high distribution of food stamps and a record number of Americans in poverty. The former president also had the lowest labor participation rate in 51 years and oversaw the worst economic recovery since the 40’s all while doubling the national debt.

Under Trump, the country is headed in a more positive direction. Trump is keeping his promises, he’s been successful with North Korea, we’re becoming energy independent, he has the biggest tax cuts all around  and instead of supporting him and the country, the left just wants him to fail so they can win since they have nothing to offer. Because of their opposition to Trump they now support MS-13, Hamas and Kim in North Korea.

Hostages are being released without giving anything in return let alone billions of dollars to an enemy country like Obama did, the summit with North Korea is back on and missiles have stopped being fired over Japan and Guam.

Among the many contentious topics swirling around this year’s campaign, none is more important than the perennial issue of employment. Voters who are employed are historically more likely to favor incumbents than those who are out of work.

That poses a major challenge for Democrats in 435 House districts and 35 Senate races who are looking to unseat Republican majorities in both chambers.

She added: Republicans’ cruel, cynical health care sabotage campaign is already spiking families’ premiums by double digits and pushing millions off their coverage, according to the nonpartisan CBO.  Big Pharma continues to hoard the benefits of the GOP tax scam, using their handouts to further enrich executives and shareholders instead of lowering prescription drug costs for seniors and sick kids.  At the same time, the President’s reckless policies are exploding gas prices, wiping out the few meager gains that some families should have received from the GOP tax scam, as wages remain stagnant.

This is further proof that the democrats are desperate and have nothing to offer as the mid-terms approach. It’s not the first time Pelosi was sour about positive economic news. She had a similar response during Trump’s first speech to Congress last year.

At that time Trump ran down a list of companies that have announced investments and job additions in the last several weeks,“Since my election, Ford, Fiat Chrysler, General Motors, Sprint, Softbank, Lockheed, Intel, Walmart and many others have announced that they will invest billions and billions of dollars in the United States and create tens of thousands of new American jobs,” Trump said.

As many stood to applaud,  Pelosi remained seated with a sour look on her face.

Pelosi couldn’t find joy in dozens of companies passing along the tax cut savings onto employees in the form of bonuses, routinely calling the $1,000-or-more checks “crumbs.”

So to sum things up, the economy is doing great, the North Korea summit is back on and the deep state is crumbling. All good news.

Just a reminder that HilLIARy Clinton, the smartest woman on the planet, spent the last 30 years of her life preparing for the presidency only to lose it to a man who took up politics as a hobby. Oh, the irony of it all.. 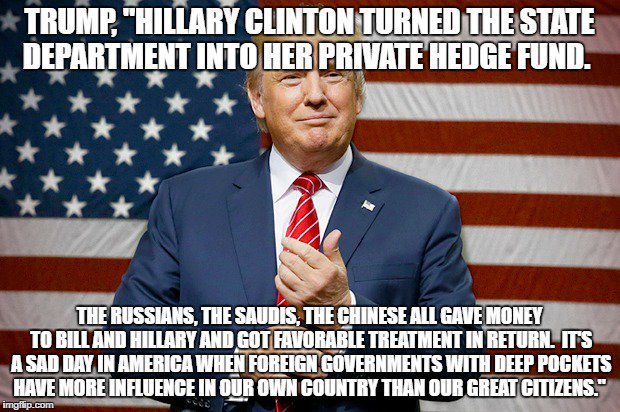