It is looking more and more like Obama’s Former FBI Director James Comey, former CIA Director John Brennan and Former NSA Director James Clapper may have lied when they put together a report released in January 2017 about Russian influence in the 2016 election. This report was used to push the entire Russia narrative.

This past week the DNC announced that they are suing Russia, WikiLeaks and the Trump campaign –

for allegedly engaging in a conspiracy to damage the Democratic Party during the 2016 presidential race.

The DNC is seeking recompense for what it says was millions of dollars in damages from Russia’s hacking of its internal emails, which were then published by WikiLeaks, with the encouragement of then-candidate Trump and his campaign.

There are many problems that the DNC faces with their case –

As Rep. Devin Nunes says  “Whatever  the left accuses you of doing, they are doing it.”

It’s ridiculous that Trump is being investigated by criminals. He should counter sue these people and expose their past crimes, however they are not the only ones behind this either. Soros’ hands are all over this. SOROS owns the DNC, he is a billionaire and controls 19 of the richest Billionaires in the world and has over 1,000 companies, organizations, PACS, entities that control and manipulate politics around the world.  SOROS owns the DNC, so why  are they in bankruptcy? They are 6 million in debt and have zero cash so they will be having big fund raisers coming up. This latest accusation is just one of them.

Hillary and DNC paid 12 million dollars to a foreign national, Christopher Steele, which is against the law, to forge counterfeit national security documents, then have OBAMA’s administration pass them around the world to slander Trump to influence the voters. The DNC and Hillary also paid millions to get the OBAMA Administration’s top law enforcement and National security Heads to frame General Flynn, Carter Page and others to try to overthrow an election, because they lost.

The problem is the news media keeps peddling this false narrative of Russian collusion when Hillary and afore people mentioned are the real colluders and sore losers want to believe that this nonsense is true.The real problem in November is low information voters.

During the discussion Nunes, who is chairman of the House Intelligence Committee, told Maria the DOJ had was NO EVIDENCE of wrongdoing when they started to spy on the Donald Trump campaign.It was all for political reasons — which is immoral, unethical and illegal.

Maria Bartiromo: Mr. Chairman you’ve got to explain what you just said. I think this is extraordinary. That you’re telling us that in order for the FBI, the Department of Justice to launch an investigation into so-called collusion between President Trump and the Russians there was no official intelligence used. Then how did this investigation start?

Rep. Nunes: This is really important to us because the intelligence investigation uses the tools of our intelligence services that are not supposed to be used on American citizens. So, we’ve long wanted to know what intelligence did you have that actually led to this investigation. So what we found now after the investigators have reviewed it is in fact there was no intelligence. So we have a traditional partnership with what’s called the Five Eyes Agreement…

The first battle was won. Trump was elected, but this is a WAR for the soul of this nation and is far from over.

The Radical Left means to take back this government, which they believe is theirs and restart the Obama Transformation.  Hillary was going to continue with the transformation into a communist/socialist state. She and Obama had a 16 year plan to do so as seen below.

We will survive, but not as a free nation. We will survive but not with the protects of the 1st, 2nd 5th Amendments. We will live in a nation with government health care, where all illegals will become citizens with more on the way, with our taxes going through the roof, with our energy bills skyrocketing because we are forced to go green.

Comes November, we MUST elect Conservative Republicans to Congress. We must elect Republican Majorities to the Senate and the House. We Must vote as if our lives, the live of our nation depends on it —— BECAUSE
IT DOES. 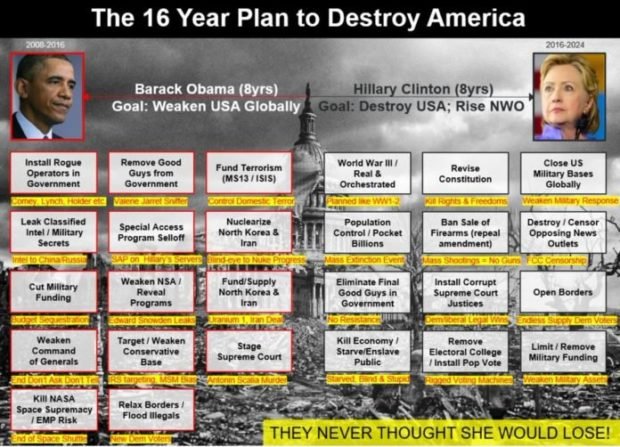 Support Conservative Daily News with a small donation via Paypal or credit card that will go towards supporting the news and commentary you've come to appreciate.
Tags
James Clapper James Comey John Brennan