Ever since Donald Trump rode down his escalator and announced he was running for president, a good swath of America, not to mention the overwhelming majority of its media, has been having the collective equivalent of a nervous breakdown.

Enter Roseanne Barr.The woman whose sitcom with John Goodman broke ground thirty years ago as a symbol of working-class progressivism returned, after a three-decade hiatus, Tuesday night, but this time as a Trump supporter.

Roseanne has always been a show about real families, real problems and an intrafamily political divide. Actually, Barr has been in the Trump camp on Twitter and elsewhere for some time, but this was her first venture into the theatrical realm. Although Roseanne is a trump supporter in real life the writers are anti-Trump, but tried to stick more to reality. Many liberal viewers called the show complaining that they were traitors to the Roseanne character but the show still retained the same feeling and the characters were interesting to see 30 years later and grown up, but still basically the same.

Although Roseanne is a Trump supporter she is not a conservative and has supported many liberal causes like Occupy Wall Street and ran for President in 2012 on the Green Party that Jill Stein ran on.

The thing with liberals is that they believe everybody hates Trump just as much as they do. On his show on Wednesday Rush Limbaugh described the new Roseanne this way saying, “The sitcom Roseanne starred Roseanne Barr and John Goodman as a middle class, middle American family known as the Conners. The show was set in a small town, Lanford, Illinois, the blue-collar family, humorous backbone through the trials of life, marriage, raising a family, making ends meet. They got an LGBQ kid, something along those lines. It was a show back in its heyday, and it had a hell of a heyday, that related almost miraculously with many blue-collar middle-class families. And it was genuinely funny. It was genuinely good entertainment with just the slightest political overtones.

It was not a program known for its political identity. In fact, you might even say it was a show about the silent majority of people who make the country work. The themes on the show were timeless about hard work, perseverance, overcoming obstacles, the difficulty of raising a family. All of those things were incorporated into this sitcom, and it had great ratings during its initial run.

Her character on this show is ardently pro-Trump, unabashedly pro-Trump. There have been interviews with the writers of this show who are ardently anti-Trump. Now, the writers have said, “Wait a minute! Don’t judge us prematurely and don’t judge us off of reviews. Judge us on what you see and wait ’til the first three or four episodes.”

This wasn’t necessarily the case with Tim Allen’s Last Man Standing – a show that brought a number of traditional American views to the forefront of the program.  Unfortunately, and possibly due to the left’s death grip on societal media, Last Man Standing didn’t last too long, having been canceled just as the conservative masses began to discover it.

In a new interview, Tim Allen is speaking out against ABC’s decision to cancelLast Man Standing after six seasons, and the failed deal to revive the family comedy on cable network CMT.

“It’s hard,” Allen says during a sit-down on Norm Macdonald Live. “I have no idea why [ABC] did what they did.” But that doesn’t stop him from suggesting that the decision came down to his conservative politics.

“I always wanted Last Man Standing to be like [All in the Family],” he says. “Archie Bunker pushed boundaries, but Carroll O’Connor was not that guy at all. [Mike Baxter was] a version of that guy. But there’s nothing more dangerous, especially in this climate, than a funny, likable conservative.”

In Wednesday’s episode, Roseanne’s sister Jackie is back acting like a raving hardcore leftist wearing her ‘I’m A Nasty Woman’ t-shirt and pink pussy hat from the recent women’s march. I thought she was too wild-eyed and more like a maniac than radical feminist. She and Roseanne trade some good Trump and fake news barbs back and forth and Jackie admits she voted for Jill Stein. Their daughter Becky is in her 40’s now and mulling over being surrogate Mom and donating her eggs to another woman. Their other daughter Darlene has a son who likes to dress in young girl’s clothes and when Dan argues with her over the fact he should dress like a boy Darlene says to let him be what he wants to be and he may grow out of it. When he is at school another girl calls him a freak and Roseanne speaks to the class about being what you want to be.

Their son DJ is grown up and out of the service and living with them with a little black girl who is his with a wife who is still overseas. In the old series DJ never said much and now 30 years later he still doesn’t talk much. In fact, at first I wondered if it was the same kid grown up or a different actor as he looked different, but it is the same one.

John Goodman is great and back as Roseanne’s husband Dan and I always liked him, but I couldn’t help but notice he seemed to waver a little and seemed off balance at times in his stance and positions and wondered if there was something physically wrong with him. Maybe not, but just my opinion. I didn’t like the fact that every time he was confronted with one of the girls’ liberal ideas he would run out into the garage for a beer.

Overall, I liked it and thought it was just Ok and interesting to see them altogether 30 years later. It got a whopping 18 million viewers and maybe that’s because people are craving for more conservative TV shows like “Last Man Standing” and “Everybody Loves Raymond” instead of being berated with liberal ideology in shows being forced down their throats. The writers and producers should take a cue from that if they want this show to succeed. TV viewers in the meantime are waiting to see where Roseanne takes this narrative. 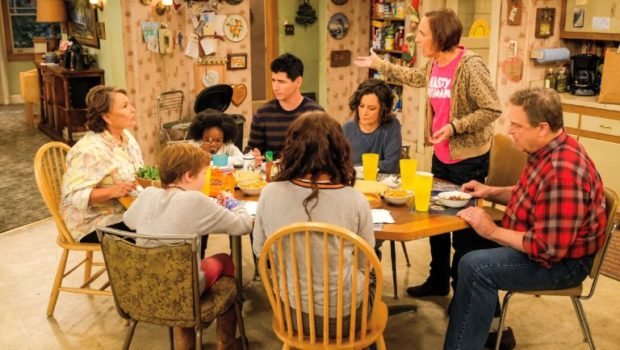