(Author’s Note: If you have any question regarding just how badly conservatives and ProLife believers have lost the Cultural Civil War, ponder this: Not a single one of the newspapers and websites that normally run my Cagle Syndicate column ran this one.)

A Maryland abortion mill recently held an audition that was so important the Washington Post covered it. And this wasn’t one of the friendly Planned Parenthood ‘clinics’ where they are so busy providing mammograms, check–ups, flu shots and underage marital counseling that abortion customers practically have to deliver in the waiting room before someone will see them. 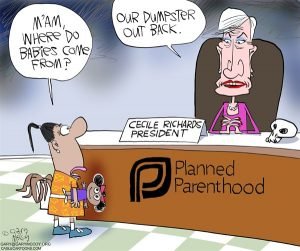 This performance was at the Carhart ‘clinic’ in Bethesda, MD. There chief executioner LeRoy Carhart terminates the life of viable, unborn babies up to five months old. Although that limit is self–imposed. In the People’s Republic of Maryland, a woman can execute her unborn child even in the ninth month.

There were four individuals present, each trying to out–do the others in their unqualified support for killing the unborn. What made this audition so newsworthy was all four claimed to be religious authorities. The Rev. Carlton Veazey, Rabbi Charles Feinberg, Rev. Cari Jackson and Rev. Barbara Gerlach were present but evidently the priest of Moloch had a schedule conflict.

None of the four are exactly mainstream clergy, the mainstreamers are the ones across the street leading prayer vigils trying to prevent abortions. Consequently, abortion mills can’t be picky when it comes recruiting spiritual help. If they own a Bible and know where to put the “amen” in a prayer, it’s good enough for the ‘Choose Death’ industry.

Veazey has been described by Tucker Carlson as “an abortion fanatic” who claims abortion “is part of the basic tenet of our church.” Veazey talks less about the photo where he was “in a nude embrace with a woman who had come to him for ‘spiritual help.’” And the Washington Post reporter didn’t inquire into the circumstances of her subsequent suicide and Veazey’s ouster as pastor of the Zion Baptist Church in Washington, DC.

Rev. Jackson is a ‘married’ lesbian and Rev. Gerlach is a widow and old–time feminist. None of the four currently have a church or synagogue that provides a salary. If they were going to generate any paid speaking opportunities from their butcher shop blessing, news coverage would be crucial.

They began with spurious ‘religious’ justifications for abortion that reeked of modern misplaced moral authority: Achieving the goal comes at someone else’s expense. In this instance, the baby.

Veazey proclaimed, “Keep them safe and keep them strong. And may they always know that all that they do is for Thy glory.” Feinberg was reassuring, “Judaism has always said abortion is never murder. It may not be permitted, depending on the circumstances…but it is never murder.” True as far as it goes. Feinberg failed to note one of those times abortion is not permitted is after 40 days. Up to 40 days a woman can go to any abortion clinic, instead of Carhart’s Last Gasp Gynecology.

After 40 days the only Jewish justification for abortion is to save the mother’s life. And saving women from homicidal ‘clumps of cells’ is exactly what late–term abortion apologists would have you believe Carhart does.

Only that’s not true either. The abortion–friendly Guttmacher Institute published a study that found “data suggest that most women seeking later terminations are not doing so for reasons of fetal anomaly or life endangerment.” Late–termers get an abortion for the same reason first trimester women get one, only they aren’t as prompt or organized.

The other justification is late–term abortions are ‘only’ 2 percent of the total, which sounds small until one realizes in 2013 there were a total of 664,435 abortions reported to the feds. Two percent of that appalling total is 13,288 unborn children killed and as National Review points out, “To get a sense of scale, consider that the CDC reports that gun homicides claimed the lives of 11,208 people in the US that year.

Jackson may have won the audition with her rousing declaration, “We give honor to all of these women who choose to come to this space. We sanctify this space, and we honor this as holy.”

That proves these vile people most certainly not in the service of either God or Jesus Christ who said in Ecclesiastes 11:5: “As thou knowest not what is the way of the spirit, nor how the bones do grow in the womb of her that is with child, even so thou knowest not the works of God who maketh all.”

During the last 100 years the world has experienced two Holocausts. A quick one by the Nazis that killed in excess of 6 million Jews and a gradual accumulation of 60,166,484 unborn children killed by abortion since the Supreme Court decided Row v. Wade in 1973.

And when comparing the two one conclusion is inescapable: As bad as the Nazis were, to my knowledge, they never had a pastor bless the ovens.

The Democrats’ ‘go-big’ bill: Free lunch, immigration, more Medicare. Just not for you.

Stupidest Story Of The Week: Put Your Masks Back On

Three Reflections On Big Headlines From The Week (Vol. 1)