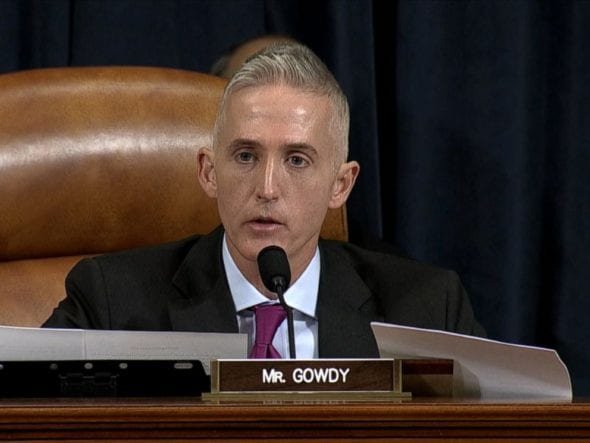 Representative Trey Gowdy (R-SC) who has been involved with investigations into Benghazi and alleged Russian interference in the 2016 presidential election, is the latest Republican to announce that he will not run for re-election in 2018.

“I will not be filing for re-election to Congress nor seeking any other political or elected office,” the congressman said in a statement released Wednesday. “Instead I will be returning to the justice system. Whatever skills I may have are better utilized in a courtroom than in Congress.”

He has been a strong advocate for Congressional oversight of both the executive branch and the election system.

Gowdy, the chairman of the powerful House Oversight Committee, also headed the select House Committee that had been charged with investigating the 2012 attack in Benghazi, Libya. As part of that probe, Gowdy took a lead role in examining Clinton’s response to the attack — an issue critics used against the Democratic nominee during the 2016 presidential race.

“I enjoy our justice system more than our political system,” he added with a similar cynicism as comments he made in December.

“There are Democrats on (the committee) that earlier this year were talking about collusion,” Gowdy said. “When you reach the conclusion and then go looking for the facts to support it, it is a very different journey than if you do not.”

Gowdy thanked his family, coworkers and supporters in the statement before telling them that this is the right time for him to end his political career.

Gowdy’s district is comfortably Republican and his departure is unlikely to affect the balance in the House of Representatives, but his announcement is the latest in a string of at least 20 GOP members stepping aside.

Support Conservative Daily News with a small donation via Paypal or credit card that will go towards supporting the news and commentary you've come to appreciate.
Tags
Politics the 2018 Midterm Elections Trey Gowdy