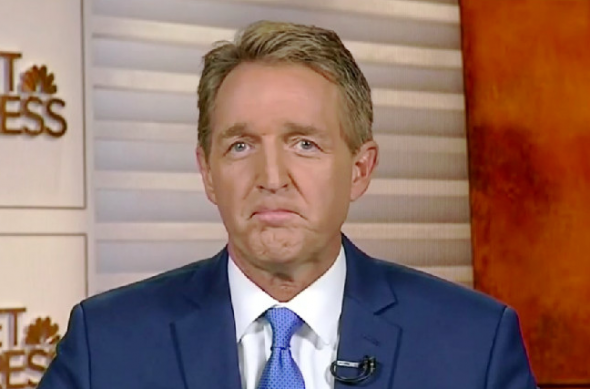 “No longer can we turn a blind eye or deaf ear to those assaults on our institutions,” Flake said in an address to a nearly empty chamber. “and … an American president who cannot take criticism, who must constantly deflect and distort and distract, who must find someone else to blame, is charting a very dangerous path.”

The institution Flake seemed most interested in protecting was the press, not the presidency.

“Now we’re told via Twitter that today the president intends to announce his choice for the, quote, ‘most corrupt and dishonest media awards,” Flake added.

Flake didn’t end with a simple defense of the media.  He pulled the whole scary despot card by mentioning Trump’s criticism of a media that has shown a clear bias against the president.

“It is a testament to the condition of our democracy that our own president uses words infamously spoken by Josef Stalin to describe his enemies,’ Flake said.

Only two anti-Trump senators, Dick Durbin (D-IL) and Amy Klobuchar (D-MN) attended the droning speech – an event more-highly anticipated by reporters than anyone else.

Flake has been a constant anti-Trump member of Congress and this newest attack bears as little merit as previous ones. The Senator’s attempt to downplay the dishonest media awards glosses over the fact that the mainstream media has aired 90% negative stories on Trump during his first year – more than any recent Commander-in-chief.

Flake may be on the wrong side of history with his brat-like rant in the Senate. 58% of voters in a November Quinnipiac poll said they disapprove of the media’s heavily negative coverage while only 38% approve.

CNN, NBC, Time, Politico and the Wall Street Journal all published stories with either bad sourcing, bad facts, misquotes or some combination. All of the stories were corrected, after long delays running at the top of the news cycle, and some ended with the responsible journalists being fired or demoted. The Washington Post, New York Times and others simply used anonymous sourcing to craft stories later found to be untrue. Some of the best of the worst from the last year are:

The list is far too long to catalog every false story but they do all share one thing in common: they only erred when it hurt Trump.

The White House said Tuesday that the media awards event is only a “potential event” and did not appear on the president’s schedule for the day indicating that, once again, Trump has managed to focus the media on a trivial event while he continues to do the work most desired by American families.

Support Conservative Daily News with a small donation via Paypal or credit card that will go towards supporting the news and commentary you've come to appreciate.
Tags
Jeff Flake