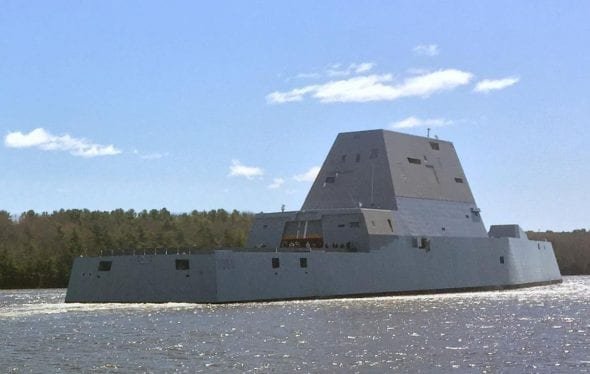 The Zumwalt class of destroyers are stealthy, ultra-tech and kind of odd-looking and the Navy just sent its second one out to sea Monday for sea trials.

The USS Michael Monsoor (DDG 1001), named after a Medal of Honor awarded Navy SEAL who selflessly threw himself on a grenade to save his team, navigated the Kennebec River to reach the Atlantic Ocean where she will spend several days at sea before returning to Bath Iron Works in Maine for adjustments.

“Michael Monsoor (DDG 1001) is currently on Builders Trials, testing the hull, mechanical and engineering components of the ship,” Bath Iron Works said in a statement. “While all these systems are tested pierside, there is no substitute for the real world testing taking place in the Gulf of Maine.”

The Monsoor is the second ship in the Zumwalt class, the first being the USS Zumwalt already in-service and being outfited with weapons and other systems at Naval Base San Diego. A third, the Lyndon B. Johnson, is currently under construction.

This video of life aboard a Zumwalt class ship features video and images of what it’s like aboard America’s most advanced warship (the ship shown is the USS Zumwalt – DDG 1000.)

Automation will allow the Zumwalt class to operate with half the crew of a traditional Arleigh Burke-class destroyer despite being significantly larger.

With all this automation, updated technology and upgraded weapons, what would happen is a Zumwalt-class destroyer ended up face-to-face with a Russian battlecruiser?

Support Conservative Daily News with a small donation via Paypal or credit card that will go towards supporting the news and commentary you've come to appreciate.
Tags
Destroyer The US Navy USS Michael Monsoor Zumwalt class