If women had only known all it took to shatter the glass ceiling was to accuse your boss of sexual harassment, workplace history would have been very different! Of course — much like a frontal assault on a machinegun nest – the first over the top aren’t getting the plum jobs, but their sacrifice makes it possible for rear echelon women to either achieve or guilt their way into the ‘C’ suites.

The bosses were all for wiping out the barriers that produced a serviceable work-life balance if it meant women were handy 24/7. For them, taking work home meant road testing the new intern. 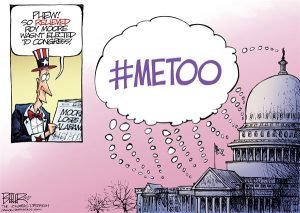 All this is why it was so refreshing to find a man in a powerful position who had strict rules regarding workplace harassment. More important, he followed those rules to the letter. That meant he was permanently immune to Gloria Allred–type ambushes at Groping Gulch.

Those rules keep his reputation intact and, equally important and often overlooked, the rules keep the reputations of the women who work for him equally intact. This is an office run on performance and not pheromones.

In short, this man is nothing short of a paragon workplace ethics and respect for women. So, you can imagine my surprise when I visited the websites of the National Organization of Women, Emily’s List, the Feminist Majority and even Jezebel and found zero recognition for this pioneer in establishing workplace boundaries.

Way back in March of this year, before our current runaway testosterone tempest, the Washington Post breathlessly announced that Pence had strict rules for his office. The commandments banned Lauer Locks on his office door because he didn’t hold closed-door meetings one–on–one with women. No intimate after–work dinners with single women either and no attendance at functions where alcohol is served if his wife isn’t there with him.

Pence wouldn’t even wear a hotel bathrobe unless there’s a swimsuit under it and he’s at the pool with his family.

Optimist that I am, I even think if Bill Clinton had followed the rules Hillary would be a happier woman and Chelsea might have a sibling.

Think of the relief it would bring to a young woman knowing she could spend time with her boss without being sent an unsolicited souvenir cellphone photo of the star attraction or a brief personal exercise video after she got home.

Maybe the response of women at leftist media institutions was caused by the Stockholm Syndrome for it was uniformly negative. You’d have thought Pence had stated sex was determined at birth, rather than by a family meeting sometime around age five.

The truth is the feminist and sophisticate reaction to Pence’s refusal to sexually harass women or put them in an awkward situation was so extreme you’d have thought Charlie Rose invited them to join him in a three-legged race around his desk.

The LA Times asked, “Mike Pence won’t dine alone with a woman who’s not his wife. Is that sexist?” An angry UCLA gender professor (is there any other kind?) dredged up by the Times thundered, “I believe this is gender discrimination. If you don’t go out to dinner with a woman, it’s hard to have a woman be your campaign manager or your chief of staff or whoever you need to regularly meet with.”

Although I think she’s confusing a caterer with a campaign aide.

What woman in her right mind would want to miss the chance to network with Harvey Weinstein’s hands?

And Aaron Blake, a male at the Post jockeying for the role of feminist fraternizer, sniffed Pence’s rules “reeked of sexism.” Which I would think beats reeking of John Conyers’ cologne, but that’s just me.

And Vox, which is currently conducting an in-house purge of its own sex harassers, was ready for a special persecutor, “Vice President Pence’s ‘never dine alone with a woman’ rule isn’t honorable. It’s probably illegal.”

And I could find no evidence of any OpMedia change of heart.

All this leads me to conclude as far as our leftist cultural arbiters are concerned, when it comes to sexual harassment, you’re damned if you do and damned if you don’t.