More specifically, I’m glad I’m not an Alabama conservative. The choice confronting conservatives in the December 12th special Senate election is very difficult. But not so tough that our cultural arbiters aren’t eager to give conservatives and Christians the benefit of their wisdom. 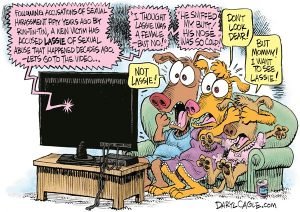 Particularly when they urge us to choose a candidate based on moral beliefs the OpMedia routinely mocks and derides. Our media betters want Christian voters to pick an ideal candidate. Someone who would look good in a Baptist pulpit, instead of the left’s hotel bathrobe.

Naturally, their choice is Democrat Doug Jones instead of hands-on Republican Roy Moore. The argument isn’t all that compelling, particularly when one recalls all of Roy Moore’s alleged victims survived, whereas Democrat Ted Kennedy’s didn’t.

This election is also noteworthy in that it reverses the usual nose–holding option conservatives confront. I recently wrote how I was tired of being told to hold my nose and vote for country club conservatives. The Republican establishment would patiently explain that even though this spineless weathervane could never be depended upon to fight for bedrock conservative issues, he would be marginally better in office than his leftist opponent, since he’s a sure vote for Mitch McConnell as Majority Leader.

This year conservatives have a chance to vote for a somewhat tarnished candidate that will fight tooth and toenail for conservative causes and the establishment tells us to forget about that nose thing and just vote Democrat.

From the beginning, I was suspicious of the alleged underage abuse allegations against Moore. I’ve worked in campaigns for over 40 years and timing is a key factor in the negative side of the campaign. I’ve been the media consultant for races where we had devastating information regarding the opponent and we sat on it for weeks or months until such a time as the information could be released and the opposing campaign would not have time to recover.

I suppose I could accept the Washington Post’s claim that their scoop on Moore was generated in-house and not handed to them on a platter like the Russian Dossier. Only, if the stories about Moore’s alleged behavior were “common knowledge,” why did the knowledge only become common nationwide after Moore defeated Luther Strange and it was too late to put someone else on the ballot?

That convenient timing looks like a premeditated decision to hold the story and thereby influence the election. Then there’s the yearbook signature that’s an exact copy of the Judge Moore signature on the woman’s divorce decree from years later, but bears no relation to his unofficial personal signature at the time the yearbook was supposedly signed.

The OpMedia is doing its part to make voting Democrat less painful for wavering conservatives and Christians. Why Democrat Doug Jones’ middle name is ‘Moderate’ according to his glowing press clippings. He’s going to focus on jobs, education and infrastructure. There’s zero mention of Jones being the frontman for a George Soros–funded effort to politicize US Attorneys.

According to Breitbart, the Soros–funded effort supported ‘ending mass incarceration’ and its report — authored by Jones — used language similar to the Obama Justice Dept. effort to grant de facto amnesty to illegal aliens.

Running in the middle and governing from the left is common for Democrats. Last election Virginia had its first transvestite candidate for the House of Delegates. This man in woman’s clothing assured voters that he also intended to focus on meat–and–potatoes issues like transportation.

You can imagine voter’s shock after he won when they learned his first issue in Richmond would be forcing insurance companies to cover ‘gender transition’ and ‘gender reassignment’ surgery. Evidently, the road our shift–shifter was most interested in improving was the one between his house and the gender-bending clinic.

Alabama voters will see the same transition when Jones gets to Washington, absent the pronoun switch.

As far as I’m concerned, the voting decision for Christians comes down to a single comparison. Roy Moore may or may not have fondled babies 40 years ago, but if Doug Jones gets to Washington he’ll be voting to kill babies and fund Planned Parenthood from day one.

That’s why if I were an Alabama voter I’d choose Roy Moore now and support a conservative opponent in the 2020 Republican primary.